Home / Features / Romantic Stories of Kashmir on Celluloid in 1960s

“Kashmir in Bollywood and Bollywood in Kashmir”. Yes, Bollywood romance and beauty of Kashmir were synonymous in the 1960s and 70s. Kashmir, the northernmost Himalayan state of India, is not just a tourist destination but a shooting location too. Most of the evergreen romantic numbers in the Bollywood albums of the golden era of Indian Cinema were picturized on the blissful moments of love in the snow-clad and lush green locales of Jammu & Kashmir, in different seasons of the year. Indian Eagle sets the clock back to retell the romantic stories of Kashmir on celluloid. 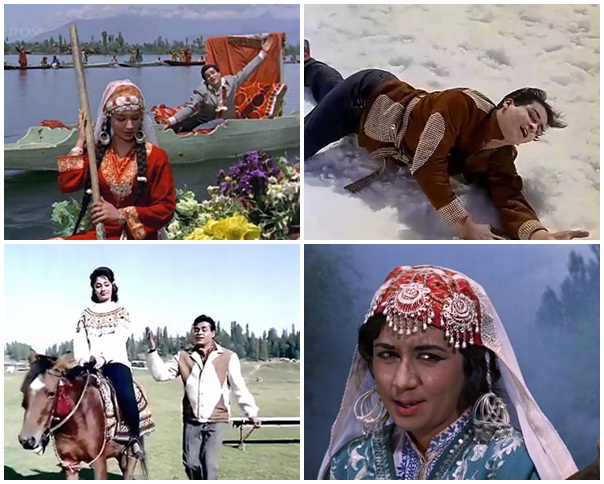 Kashmir was the prime shooting location of the Bollywood films starring Shammi Kapoor in the 1960s. The first half of the movie Junglee, released in 1961, was shot in the snow-clad mountainous locales of Srinagar, the capital of Kashmir where Shammi Kapoor’s humorless character fell in love and became crazy. Kashmir became a popular tourist destination with the popularity of the song “Yahoo! Chahe mujhe koi junglee kahe”.

“Yeh chaand sa roshan chehra”, an eternal romantic song which has been wooing hearts for generations, still endears the quintessential picturesqueness of Kashmir to lovers. The song from the music album of Kashmir ki Kali released in 1964 was filmed on the shimmering waters of Dal Lake in the background. The heroine clad in the ethnic outfit of a Kashmiri girl is sitting in a boat, and the hero is wooing her from another boat.

It is Kashmir where the love story of a pretty girl and a skiing champion begins rolling in Arzoo, a 1965 Bollywood classic. The first half of the film was shot in the snow-clad hilly landscape of Kashmir. The romantic number “Ae Nargise Mastana” from the music album of Arzoo was picturized in rhyme with the natural bliss of Kashmir.

The sensuous beauty of Kashmir makes two strangers fall in love irrespective of their different socio-economic backgrounds. This is the love story of a young boatman who owns a houseboat on Dal Lake and a city-bred, fashion-conscious girl in Jab Jab Phool Khile, a 1965 Bollywood blockbuster. The Himalayan landscape of Kashmir served as the backdrop of the popular song “Pardesiyon se na akhiyaan milana.”

Kashmir in its glory was enticingly shot in Mere Sanam, another Bollywood blockbuster in 1965. “Pukaarta chala hoon main”, one of the most romantic melodies of the 1960s in Rafi’s soulful voice, was picturized on the lead pair in the picturesque locales of Kashmir. The hero is seen wooing his ladylove, while the other girls around them are cycling along the slender, sloping zigzags.

The autumnal beauty of Kashmir was best captured in many frames of the movie Jaanwar starring Shammi Kapoor and Rajshree in the lead. The hilly being of Kashmir seemed to echo the eloquence of the song “Tumse achha kon hain” in praise of the heroine’s beauty in the movie. The landscape with golden brown chinar leaves strewn here and there is a visual attraction of the song.

Kashmir retains the same beguiling beauty and bucolic bliss as in the 1960s. Visit the Paradise on earth and live the love moments of Bollywood’s “old is gold” romantic songs. IndianEagle.com will book cheap flights to India for you.