Born in 1861, Rabindranath Tagore penned the Gitanjali which gained critical acclaim for its profoundly sensitive, fresh and beautiful verse. He has earned the rare distinction of becaming the first non-European to win the Nobel Prize for Literature in 1913. 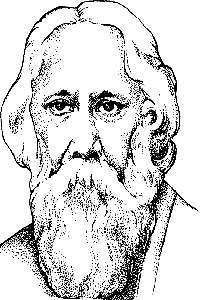 He was the youngest son of Debendranath Tagore, leader of the Brahmo Samaj.His brainchild experimental school at Shantiniketan followed the ideology of Upanishadic education.

Homeschooled until seventeen, Tagore pursued his formal education in England. His active participation in many literary activities and exposure to life outside made him introspect into his human side. He participated in the Indian Nationalist movement in a visionary manner alongside Gandhiji.

Knighted by the ruling British Government in 1915, his patriotic spirit did not agree with the British policies, thus he resigned from the honor.Tagore had penned  in all genres like musical dramas, dance dramas, essays of all types, travel diaries, and two autobiographies.Tagore was also a painter and music composer too, but primarily a Poet beyond description.

His literary works were translated into other languages which found acceptance in the West as well. Tagore toured round the world delivering lectures and turned into an ambassador of India’s spiritual heritage.In Bengal, the Nobel Laureate is considered as an institution in himself.