The New Year 2018 came with a calendar full of events for New York Indians and Desis in New Jersey. The month of February is no less entertaining than January for the Indian community in USA. Religious occasions, cultural programs and comedy shows are in harmony among Indian events in New York and New Jersey events in in February 2018. We at Indian Eagle selected some of the best for you. 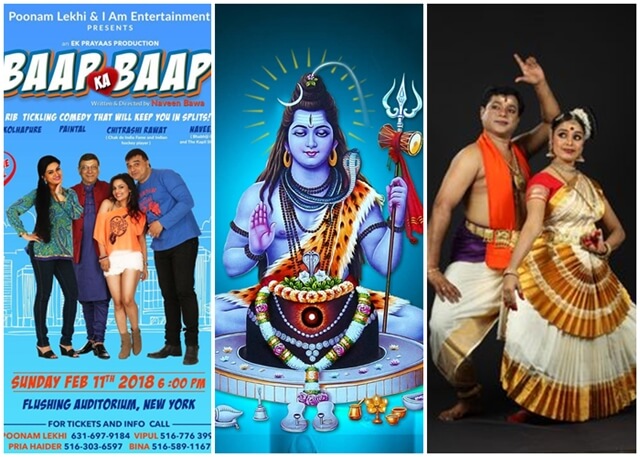 Several venues across New York City are all set for Maha Shivaratri celebrations on February 13. Among the religious Indian events in New York in February 2018, this festival in honor of Lord Shiva will enthusiastically be celebrated at Sankat Mochan Hanuman Mandir and Siva Shakti Peeth in New York. The traditional rituals and cultural programs accompanying the worship of Lord Shiva will be a testimony to New York Indians’ attachment to their native culture.

Indian Dance Workshop on February 24 is a golden opportunity for New York Indians to get immersed in the soulfulness of Indian classical dance and music. Mohiniyattam and Carnatic Music will take center stage at Indian Dance Workshop among the New York Indian events in February 2018. Some of the stalwarts of Indian classical dance and music will impart lessons on Mohiniyattam and Carnatic Music to young Indians in New York.

David Vaughan’s The Dance Historian Is In

David Vaughan’s ‘The Dance Historian Is In: Indian Classical Dance’ on February 28 will be a complete introduction to the Indian classical dance heritage. One of the upcoming New York Indian events in February 2018, it will be a tribute to the legendary dance archivist, historian and critic. The event will celebrate David Vaughan’s legacy with eminent Indian danseuse and dance historian Rajika Puri showcasing clips on various Indian classical dance forms such as Bharatanatyam and Odissi.

Indians in New York and New Jersey will laugh their heart out at Baap Ka Baap comedy show in New York’s Flushing and New Jersey’s Edison on February 11 and 23 respectively. Of all the Indian events in New York and New Jersey Indian events in February 2018, this comedy drama is the best as it features hilarious performances of veteran Bollywood actress Padmini Kolhapure, eminent comedian Paintal, young actress Chitrashi Rawat and actor Naveen Bawa. The Hindi play will surely entertain the audience with side-splitting comedy and try to break stereotypes on widow remarriage.

Indians in New Jersey are gearing up to showcase their musical ability at Swaradhara 2018 on February 17 at Old Bridge Township. Among the cultural New Jersey Indian events in February 2018, it provides an excellent platform for aspiring Hindustani classical musicians to introduce their talent to the world. Open to all US citizens interested in Hindustani classical music, the contest will be a treat to the music lovers.

Young Indians in and around New Jersey will also have fun at the Love, Peace and Harmony ‘Art Competition’ on February 18 in South Plainfield. Riding high on the stupendous success of the first three editions of the competition, the Menlo Park Lions Club is hosting its 4th edition highlighting the importance of love, peace and harmony in the world. One of the top New Jersey events for Indians in February 2018, the competition will be an amazing opportunity for children aged between 3 and 14 to hone their creative skills in painting.

Travel Beats, a leading Indian American community magazine by Indian Eagle, publishes the latest travel, tourism, visa, immigration, community news and events. Indian Eagle is a trusted travel partner of Indians in the US for booking their cheap flights from New York to India and cheap air tickets to India from New Jersey.