While we’re not yet done celebrating Indian-American Abhijit Banerjee’s entry to the elite club of Nobel Laureates in the world, two Indian American teenagers’ award-winning, environment-friendly inventions are ample reasons for us to have a double pre-Diwali celebration. Neil Deshmukh and Maanasa Mendu are named among the 25 outstanding young leaders for the Gloria Barron Prize 2019. 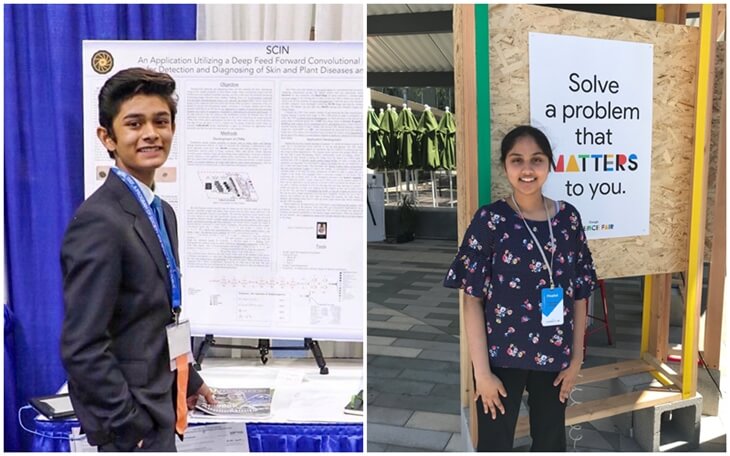 16-year-old Neil Deshmukh of Pennsylvania has won the Gloria Barron Prize 2019 for his free app “PlantumAI” that he created to help poor farmers and save water bodies in developing countries like India. Available for free, the app works offline to help farmers reduce the use of toxic pesticides in fields and detect various crop diseases, even in far-flung areas of rural India.

During his trip to India in 2016, Neil Deshmukh learned how atmospheric extremes and whimsical weather are taking a toll on farmers’ hard work at his grandfather’s farm in Maharashtra. Farmers were struggling to reap maximum yields by using pesticides to save crops from seasonal diseases. The toxic residues of the pesticides used in fields ended up polluting countryside water bodies – the elixir of cultivation for farmers.

Neil took a flight from Pennsylvania to India in 2018 after developing the app “PlantumAI” and ran a pilot test at his family farm. He partnered with plant pathologists and botanists at Akola Agriculture University, in the Vidarbha region of Maharashtra, to educate farmers on how to use the app and why. While the Indian American teen continues fine-tuning the app, more than 1000 crop diseases in India have been identified and studied so far using the app.

“My dream is to impact lives positively using artificial intelligence and data crowd-sourcing to make the world a better place for everyone, irrespective of their socio-economic status,” said Neil Deshmukh, the Gloria Barron Prize 2019 winner. He is currently helping the farmers of 12 villages across Maharashtra maximize healthy crop yields.

An advocate of renewable energy, Maanasa Mendu owes her invention HARVEST to her roots in rural India where many households are exposed to the environmental hazards of using kerosene lamps due to daily electrical blackouts. During one of her trips to India, she felt the urge to empower those households with a low-cost device using renewable energy.

She spent three years designing several different prototypes of HARVEST and conducting about 1200 trials. The latest version of Maanasa Mendu’s HARVEST features energy-harvesting leaves which, when exposed to sunlight or wind or precipitation, produce an electrical charge. Her invention is modeled on the piezoelectric effect – the ability of certain energy-harvesting materials.

16-year-old Maanasa Mendu is also a budding philanthropist. She spends a portion of her scholarships and cash prizes from various science competitions to help run the Maruthi Foundation in India. The nonprofit provides the needy students with educational opportunities.

She is trying every possible way to make HARVEST available globally as a Do-It-Yourself kit. “I’ve also learned that you’re never too young or too old or too inexperienced to see a problem in the world and try to solve it,” says Maanasa.

Travel Beats, a subsidiary of Indian Eagle, strives to promote achievements of young Indians in USA. Indian Eagle, a most trusted travel booking partner of Indians in America, not only helps you travel on cheap last-minute flights to India but also shares latest updates on visa, immigration, Indian passport and major airlines.