Dandiya Ras, Garba, Men and Women in colorful attire and music playing with live Orchestra. It’s Navratri time. The launching of festivities begins with Navrathri, which goes on for 9 days.It culminates into the 10th day as Dussehra.” 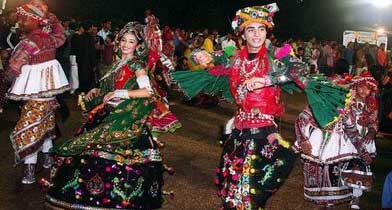 Dandiyas (the colorful wooden sticks), the costume (chaniya choli) and the dance (Garba) the Navrathri combination is incomplete without them.

The Dandiya Raas has men and women in two circles, dancing to the beats of the Dhol (drum) with the sticks (dandiya) colliding to produce a uniform sound.The Live orchestra is the real essence of Navrathri, with special singers brought in for the occasion.

From the oldest member of the family to kids, the entire family participates in the Navrathri event with gaiety. The origin of Garba is for devotional reasons which was performed in honor of Goddess Durga. The dance form is a mock fight between the Goddess and Mahishasura, the mighty demon-king.

Nicknamed “The Sword Dance” the dancers move on their feet to the rhythmic music of the dhol which is often the complementary percussion instrument to set feet tapping.

The sticks (dandiyas) of the dance are symbolic of the Sword. The costumes are multi-colored embroidered choli, ghagra and bandhani dupattas (traditional attire) with mirror work and heavy jewellery. The men are equally dressy in special turbans and kedias.

The difference between Garba and Dandiya is Garba is performed before Aarti (worshipping ritual), while Dandiya is performed after the Aarti, as a part of the merriment. Men and women join in for both Raas Dandiya and Garba.

Garba  Raas is predominately celebrated in Gujarat, but has extended itself to other festivals like Harvest festivals. Navrathri has spread to the southern states of India which heralds the important festival of Dusshera.