D. Anderson rightly said, “Feminism is not about making women strong. Women are already strong. It’s about changing the way the world perceives that strength.” This quote on women empowerment is true about the 28 contestants, including seven Indian-origin women, for Miss World America 2020. Serene Singh of Colorado, Radhika Shah of Nevada, Manju Bangalore of Oregon, Manya Saaraswat of Pennsylvania, Mangala Chava of West Virginia, Amulya Chava of Kansas, and Shree Saini of Washington are the Indian American contestants for the most coveted title – Miss World America 2020. The contest will be virtually held to a live audience, and the winner will get a fully paid trip to Los Angeles for the crowning ceremony. 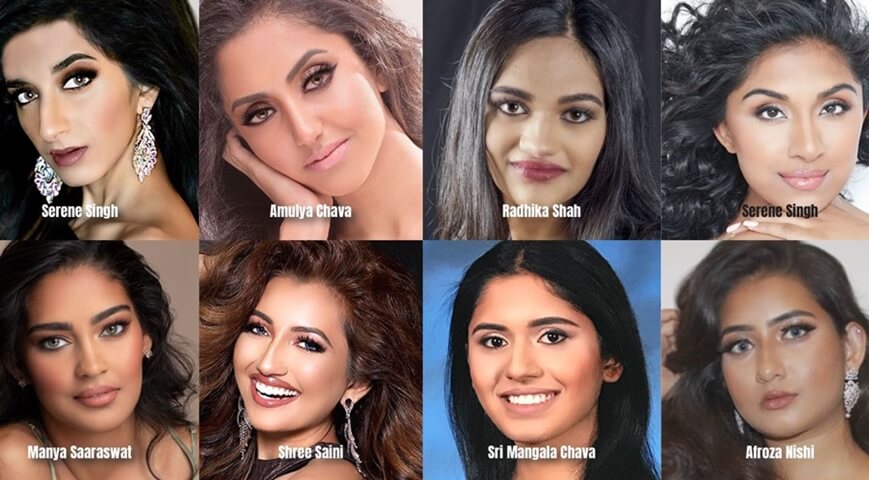 Serene Singh of Colorado is one of the Indian American contestants for the Miss World America 2020 title. A Rhodes Scholar and a Truman Scholar, she is pursuing PhD in criminal justice at the University of Oxford. A Colorado University graduate in journalism and political science, Serene Singh works for empowering girls and women at risk. Driven by her passion for public service, she aspires to serve in the US Supreme Court one day. Former Miss Colorado Teen, Serene Singh runs a nonprofit, The Serenity Project – Brave Enough to Fly, to help distressed women rebuild their confidence. She had hit upon the idea of founding The Serenity Project while working in the US Senate on trafficking and abuse of women.

Among the Indian-origin contestants for Miss World America 2020, Radhika Shah is an aspiring physician. Currently, she is majoring in public policy from Stanford University. The youngest youth commissioner for the state of Nevada, Radhika was one of the Top 100 Women of Influence in 2018. She founded a 501c3 nonprofit, Real Autism Difference, when she was only 16, to help autistic people with respite services. She raised more than $100,000 only in two years to fund several initiatives for the nonprofit, Real Autism Difference. She has worked with students with disabilities in Clark County School District and contributed to special education forums.

A resident of Los Angeles, 22-year-old Manju Bangalore will contest for Miss World America 2020 from Oregon. A physicist and actor, she is currently pursuing masters in aerospace engineering. In addition to having the experience of working at two NASA centers, including Johnson Space Center, she interned in the White House on former President Obama’s science policy. A graduate of the University of Oregon, Manju Bangalore runs a nonprofit, Operation Period, aiming to eradicate the taboo about menstruation from society. She fights menstrual inequity through various community activities.

Manya Saaraswat of Pennsylvania, whose physician parents immigrated to the US when she was 3 years old, is one of the six Indian-origin contestants for the crown of Miss World America 2020. Manya has been leading a value-oriented life from a tender age. She was initiated into volunteering at 14 when she started offering free services in a local hospital’s neonatal intensive care unit. She has also volunteered as an intern at a hospital in her native place in India. On the strength of her merit and hard work, she earned presidential fellowship at Bucknell University and stem cell internship at Harvard University. Her love for pediatrics and medicine got her published in various publications, including medical journals.

Among the 2020 Miss World America contestants of Indian origin, Mangala Chava will represent West Virginia. She is a fresh Biology graduate from the University of California, San Diego aiming to make it big as a physician. What interests her the most is working with senior citizens, and that’s why she is volunteering for Alzheimer’s in Orange County, California. Opening a retirement home for the abandoned/abused elderly and setting up a clinic for holistic treatment of the body as well as the mind are the goals she is looking to accomplish in the days to come. Reading historical fiction in leisure is one of her hobbies.

Representing the State of Kansas is Amulya Chava, one of the seven Indian-American contestants for Miss World America 2020. The founding president of the Wounded Warrior Project chapter in her neighborhood, Amulya aspires to become a civil rights attorney. She puts in her best efforts to motivate others towards making a difference in the lives of struggling, lonely veterans. Recently, she became a published author with the release of her first title, “Soar.” Historical fiction is her favorite genre in literature, and baking is her favorite pastime. Amulya Chava is currently majoring in political science.

The Miss India Worldwide 2018 title winner, Shree Saini is all set to represent Washington in the Miss World America 2020. An anti-bullying activist, she ardently advocates one’s right to dignity against racial discrimination. She was subjected to bullying in school for being a person of color from India after her parents relocated to Moses Lake in Washington State from Punjab. Though she has been living on a pacemaker since the age of 12, Shree Saini never let physical restrictions come her way. She speaks at public gatherings, hosts fundraising events, spreads awareness about psychological harms of nonverbal bullying, and empowers girls with techniques to keep bullies away. At 15, she founded a nonprofit to champion the causes related to heart health and emotional health. Shree Saini, the Miss India USA 2017 winner, is committed to eradicating human trafficking.