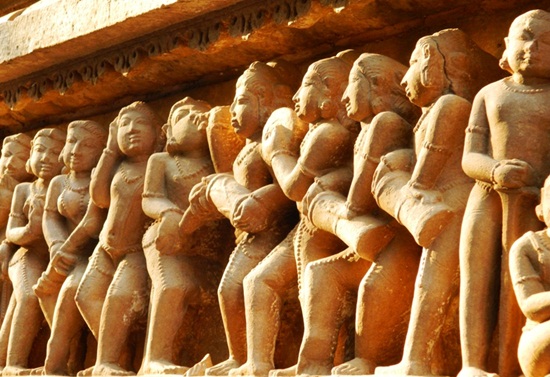 Apart from the Khajuraho history, there is a legend. The curiosity about the origin of Khajuraho temples runs high until the legend is explored. According to the legend, the creators of Khajuraho were descendants of the moon god in Indian mythology. It begins with the story of Hemavati, daughter of a Brahmin priest. Attracted to her maiden beauty, the moon god descended on earth and seduced her when she was bathing, on one evening. It was the intense passion that made her give in to his advances. He could not resist the spell of her maiden charm. Their union gave birth to a son, Chandravarman.

The then society did not welcome the apparently unusual union of a god and a mortal as it was not solemnized as per traditions and through rituals. Being unwed mother of a son, Hemavati suffered harassment in society. Stung by unkind words, she retreated to the dense forest of present Madhya Pradesh in Central India. She brought up the child in the wilderness. When the boy grew up, he became founder of the Chandela dynasty.

After he became a powerful ruler, his mother visited him in dream and requested him to build temples that would concretize human passions in form of art. She told him that passion is nothing but an overwhelming human desire for love. Touched by the emptiness of his mother’s life, Chandravarman commissioned the construction of the first group of Khajuraho temples. The other temples in Khajuraho Town were built by his successors. If the legend is believed, the temples stand for love in Khajuraho.

Khajuraho sculpture was a study of eroticism

Khajuraho is accessible from Delhi, Agra and Varanasi by air. You can catch Khajuraho flights at the domestic terminal of Indira Gandhi International Airport, New Delhi. You can travel by train from Khajuraho to Orcha and Jhansi, two historic destinations in Bundelkhand region of Madhya Pradesh.

IndianEagle.com books cheap flights to New Delhi IGI Airport. You can check and book cheap flight tickets to India on our website at any time.