Eight meritorious India-origin students are all set for summer internship in Congressional offices and various departments of the US government in Washington DC. These talented undergraduate students from South Asian communities in the United States have recently been inducted into the Washington Leadership Program 2020 for a first-hand exposure to the dynamics of various federal government agencies and their public service operations. They are Vignesh Iyer, Ananya Kachru, Rucha Modi, Tarun Ramesh, Krithika Shamanna, Hillary Shah, Vishwa Padigepati, and Shreya Pabbaraju.

The Washington Leadership Program is a national non-profit initiative that is exclusively aimed at developing and nurturing the next-gen American leadership from South Asian communities. Instituted in 1995, the Washington Leadership Program (WLP) handpicks interns from among the most promising South Asian undergraduate students, who are US citizens or legal permanent residents. 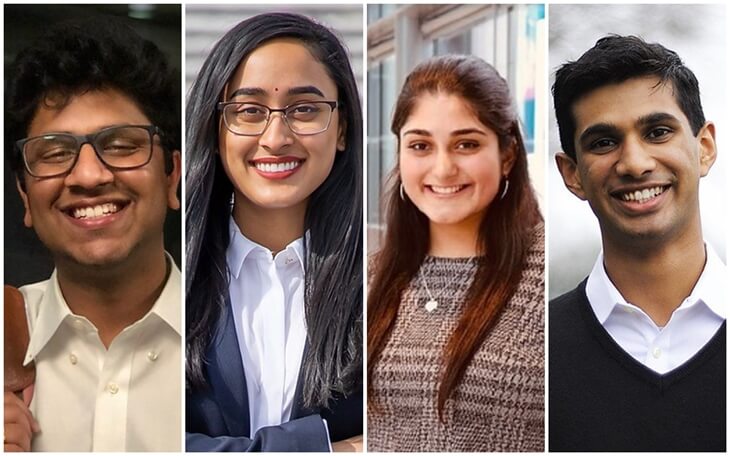 Among the WLP scholars in 2020, Vignesh Iyer from California will be interning in Indian American Congressman Raja Krishnamoorthi’s office. An undergraduate at the University of California, he is equally passionate about politics and public service. While serving on the Student Association’s Board of Directors at the university, Vignesh Iyer happened to work with Governor Gavin Newsom and the Mayor of San Francisco on such critical campaigns as racial justice, homelessness, and students’ financial aid. He has worked as a legislative intern in the office of Mayor London Breed. Since he came to the United States in 2014, he has been an active community member.

Placed as an intern in Pramila Jayapal’s office, Ananya Kachru is one of the Indian-origin scholars of the Washington Leadership Program 2020. A pride of the Indian community in Connecticut, Ananya is majoring in global affairs at Yale University. She has proved to be a leader on several occasions, including the 2020 South Asian Youth Initiative, a platform for South Asian students in America to have multifaceted discussions on sensitive issues like mental health and gender violence. Apart from being co-President of the Yale Women’s Leadership Initiative and South Asian Society, she is a Yale Campus tour guide.

Rucha Modi in US Agency for International Development

One of the most versatile WLP scholars 2020, Rucha Modi is minoring in public affairs and majoring in global studies at the University of California. Born to an immigrant couple from Gujarat, Rucha is currently busy making a documentary on California’s public higher education system, alongside working on other projects including media rhetoric and LGBTQ nondiscrimination. She aspires to mobilize young Americans of South Asian origin against exclusionary politics and systematic iniquities in India and the United States. On the Los Angeles campus, she has donned the hat of a Lobbying Director for the university’s undergraduate student government. She will be interning with the US Agency for International Development.

Tarun Ramesh in Department of Health and Human Services

All set to intern in the Department of Health & Human Services, Indian American Tarun Ramesh is majoring in economics and genetics at the University of Georgia. His in-depth work on opioid use disorder, sudden closure of rural hospitals, and impact of addiction-induced epidemics on vulnerable sections of society have been published by the Center for American Progress, the Undergraduate Economic Review, the Roosevelt Institute, and the Georgia Political Review. Socio-political campaigns, correctional facilities, and legislators have benefited from the implementation of his policy recommendations. Tarun Ramesh’s investigative research on socioeconomic determinants of addiction makes him a deserving intern for the Washington Leadership Program 2020. He aspires to study masters in health economics.

Krithika Shamanna in Department of Commerce

Among the Indian American WLP scholars of 2020, Krithika Shamanna is majoring in political science at Rice University, Houston. Her focus is the study of women, gender and sexuality. Alongside pursuing a certificate course in Civic Leadership, Krithika leads a chapter of nonprofit ‘Deeds Not Words’. She aims at studying the intersection of law, women’s rights and public policy in the future. Being a law aspirant, she is focused on protecting the rights of women and economically disadvantaged communities by means of law. She will be interning in the Department of Commerce.

Hillary Shah in Department of Commerce – Office of Civil Rights

One of the Washington Leadership Program 2020 interns, Hillary Shah is placed in the Department of Commerce, Office of Civil Rights. She is majoring in political science and economics at the University of North Texas while minoring in legal studies. She is inclined towards rekindling the American Dream and pooling down divisive politics as well as ostracizing social structures that prevent marginalized communities from realizing their potential. Gun violence prevention and resource distribution to women of color are on her agenda. Hillary Shah aspires to attend a law school and be a public advocacy lawyer to the neglected in her community.

Vishwa Padigepati in Department of Commerce

All set to be interning in the Department of Commerce, Vishwa Padigepati is majoring in Cognitive Science and Political Science at Yale University. Genocide prevention is one of the things that she is very passionate about. Born in India and schooled in France, she calls California home now. In her spare time, she volunteers as a youth leader for Plan International USA. This WLP scholar of Indian origin is keen on studying developmental infrastructure and human rights law. In her campus life, she serves on the board of Yale Review of International Studies.

Shreya Pabbaraju in US Agency for International Department

Of all the eight Indian-origin WLP scholars in 2020, Shreya Pabbaraju will be interning in the US Agency for International Department. She is majoring in Political Science, English Literature and creative writing. A fourth-year student at Emory College of Arts and Sciences, Shreya Pabbaraju is a lead coder and research assistant for a humanitarian project on military violence in Northern Ireland. She is also working on a thesis on violence and crimes against women in India and other developing countries. She has also interned with the Carter Center’s Human Rights.

This story is part of our continued effort to promote achievements of Indians in USA, at Travel Beats – a subsidiary of Indian Eagle. Subscribe to our free newsletter for latest community news, exclusive stories, US immigration policies, and first-hand US-India travel updates.