The martyrdom of over 40 CRPF personnel in the dastardly #Pulwama terror attack reminds us of those Indian households and mothers who muster the courage to send their sons to serve in the armed forces so that the 134-crore population of India remains safe within the borders. Some villages deserve a special mention for being at the forefront of producing men of steel and giving away them at the obedience of Mother India. Joining the Indian Army is an unambiguous choice, an age-old tradition and a matter of pride for the youth of Indian military villages whose men created history fighting for the nation and dying in the line of duty in the pre-independence and post-independence wars.

Far away from the glitters of urban civilization, the army villages of Uttar Pradesh, Rajasthan, Haryana, Punjab, Andhra Pradesh, Tamil Nadu, Karnataka, Maharashtra and northeastern states have carved a niche in the military history of India. Indian military villages don’t mourn the death of their brave sons; they rather consider the sacrifice as an inspiration for their youngsters. We at Travel Beats, an overseas Indian community portal by Indian Eagle Travel, took a walk through some of the Indian military villages to pay out tribute to the #Pulwama CRPF martyrs. 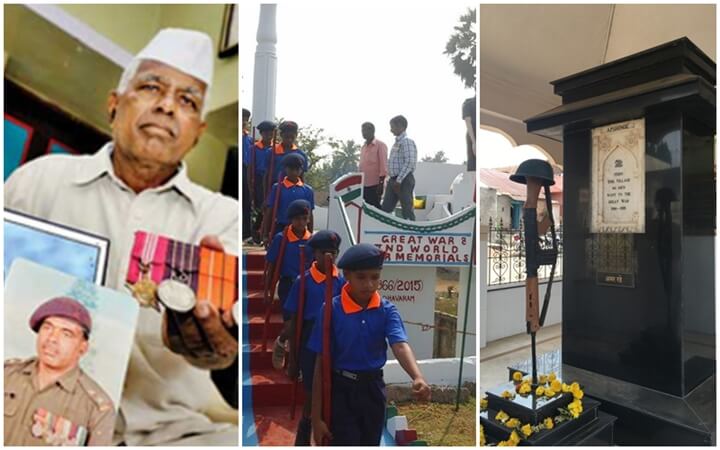 The Indian state of Uttar Pradesh is as much known for its military villages as for its historical tourist sites. India’s largest village, Gahmar in Ghazipur district of Uttar Pradesh prides itself on being called the ‘home of the fauji.’ An overwhelming sense of pride pervaded the village of Gahmar in Uttar Pradesh during the cremation of Harinder Yadav, one of the URI martyrs, in the neighboring Deopur village. Varanasi is a 90-km drive from Gahmar.

With nearly 18,000 men serving in the Indian Army and over 10,000 veterans having retired from the army, Gahmar in Uttar Pradesh’s Ghazipur district has attained the distinction of India’s ultimate military village. Some of the village households have sent more than one member to serve the nation, and the interior of every house displays photographs of the martyrs. Sumita Singh, a resident of the village, lost her father in the 1971 Liberation War, her brother in the Kargil War, and her grandson in the 2007 Kashmir insurgency.

Since the First World War when more than 220 men of Gahmar were forced to join the British force, it has been a tradition for their descendants to join Indian armed forces and serve the nation at borders. It is said that military grooms from Gahmar have better marriage prospects than civilian grooms from the neighboring villages.

Madhavaram in Andhra Pradesh is one of the few Indian military villages, which has at least one member from each of its households serving in the Indian Army. Located in West Godavari district of Andhra Pradesh, Military Madhavaram Village, as it is popularly known as, has 30-decades-old history of the valor of its men fighting for the nation’s honor and guarding the borders. Over a hundred households in Madhavaram proudly possess war decorations that their male members have been bestowed upon. It is said that women of the neighboring villages take pride in tying the nuptial knot with the military men of Madhavaram in Andhra Pradesh.

The military history of Madhavaram in Andhra Pradesh dates back to the 17th century when the village was a defence base of Pusapati Madhava Varma Brahma, the ruler of the Gajapati dynasty spanning the Deccan Plateau and Odisha. Some of the soldiers from across his dynasty were settled in Madhavaram village, from where they found it easy to fight for other rulers of the region, including Kakatiya’s Rani Rudrama Devi.

The military history of Madhavaram in Andhra Pradesh is full of stories about Subedar Vempalli Venkatachalam, one of the war heroes, who was conferred upon the Victoria Cross Medal, the highest honor for gallantry in the British Raj. His son named Markandeyulu had participated in the 1962 Sino-Indian war, the 1965 Indo-Pak war, and the 1971 Bangladesh liberation war. His grandson, Subbarao Naidu is a retiree from the Indian Army, and his great grandson is currently in the military force.

Today, nearly 250 men from Military Madhavaram Village are deployed along the borders of India. In memory of its soldiers’ service and sacrifice, Madhavaram Village has consecrated a war memorial built on the lines of New Delhi’s Amar Jawan Jyoti. Besides, the village has an Ex-Servicemen Association comprising of 1180 retirees from the Indian Army. A few documentaries and the national award winning film Kanche are based on the military history of Madhavaram in Andhra Pradesh.

In Tamil Nadu, Vellore district is home to the few Indian military villages including Kammavanpettai which have been sending its men to defend the country’s far-flung borders for more than 70 years. The valor of the men from Kammavanpettai and the neighboring villages – Penathur and Kattupudur – in the battlefields from the World War II to the Kargil War have been told and written about innumerable times. Most of the 39173 ex-servicemen in Vellore district are from Kammavanpettai, Penathur and Kattupudur.

The village has over 1500 war widows, and an equal number of young men from the village are currently serving in Indian armed forces. The martyrs of Kammavanpettai, including Narayana who attained martyrdom in the Kargil War and Vijay Kumar who was martyred during the 2007 insurgency movement in Assam, are the inspiring role models to the village’s youngsters who follow a strict fitness regime in order to join the army.

Over 90% of the households of Kammavanpettai in Tamil Nadu’s Vellore district have their men in the Indian Army. Evidently, Kammavanpettai is nicknamed Ranuvapettai meaning Army Village. Chennai is a 3-hour drive from this Indian military village.

Apshinge Military Village is one of the lesser-known tourist places in rural India for those who think high of Indian soldiers and revere martyrs. Situated at a short drive off the highway between Pune and Satara in Maharashtra, Apshinge Military Village is a small hamlet of 850 houses which have sent one of their family members to serve in the armed forces for the nation. It is believed to have been an age-old tradition of Nikumbh Rajputs in the village from the time of Maratha King Shivaji.

An erstwhile Maratha settlement, this Indian military village had lost its 46 soldiers in the First World War, which the British recognized in the form of a war memorial with the names of the martyrs.

Brave sons of Apshinge also participated in all post-independence wars, including the 1962 Indo-China war, and the wars fought against Pakistan, according to the available records. The village had also contributed four soldiers to Netaji Subhash Chandra Bose’s Azad Hind Fauj. The historical significance of Apshinge lies in the fact that men from Apshinge were part of Shivaji Maharaj’s army. It is also said that the first Chief of Indian Army, General Kariappa had visited the village in 1948.

Situated some 15 kilometers from Agra in Uttar Pradesh, Atus is one of the military villages in India. About 30% of the youth of the village, equal to 800, is serving in Indian armed forces. The current population of Atus includes over 200 retired army personnel. The menfolk of this Indian military village started responding to the call of the nation to defend the borders when Dashrath Singh, a soldier from the village, was slain by the Pakistani army in 2000.

Among the Indian military villages, Atus in Uttar Pradesh has banned alcohol and smoking. The village has its own set of rules to bar the youngsters, aspiring to join the Indian Army, from indulging in smoking and alcohol. Anybody found drunk is both punished and penalized. The panchayat rewards those who give a tipoff about any intoxicated person from the village. The neighboring villages have emulated the same rules for their youth.