India is going to celebrate the 67th year of her Independence this 15th August. Most of the times, we introduce our NRI friends and relatives to the cultural heritage, architectural wonders, literary opulence and age-old legends of incredible India. India is a must visit for not only tourist attractions but also the history of freedom movement against the British Raj. Apart from monuments, caves, forts, waterfalls and hill stations, there are several historic sites which are associated with the events in the chronicle of Indian Independence Movement. On the eve of Independence Day, 15th August, Indian Eagle calls it a duty to connect the young NRIs with the history of India’s freedom struggle, legendary freedom fighters and the states where the torch of nationalism was lit up.

Bengal, as West Bengal is popularly known, enjoys eminence for its immense contribution to Indian Independence Movement. With the Battle of Plassey fought against the British East Indian Company in 1757, the seeds of freedom struggle were sown in the soil of Bengal. It was the first rebellion to have paved the way for national freedom movement across the county. Mangal Pandey, the first martyr in the history of Indian freedom struggle, was a noble son of Bengal. The freedom fighters of the then undivided Bengal (including both West Bengal and Bangladesh) were such revolutionary figures as Netaji Subhash Chandra Bose, Khudiram, Chittaranjan Das, Surya Sen, Prafulla Chaki, Rash Behari Bose, Jatindranath Mukherjee and Matangini Hazra. Bengal was the epicenter of “Quit India” movement in 1942. Rabindranath Tagore who brought the Nobel Prize for literature to Bengal fired up the spirit of the revolutionaries through his patriotic songs and poems: “Where the mind is without fear and the head is held high”. Rammohan Roy, Swami Vivekananda and Kazi Najrul Islam carried the torch of nationalism in British India. 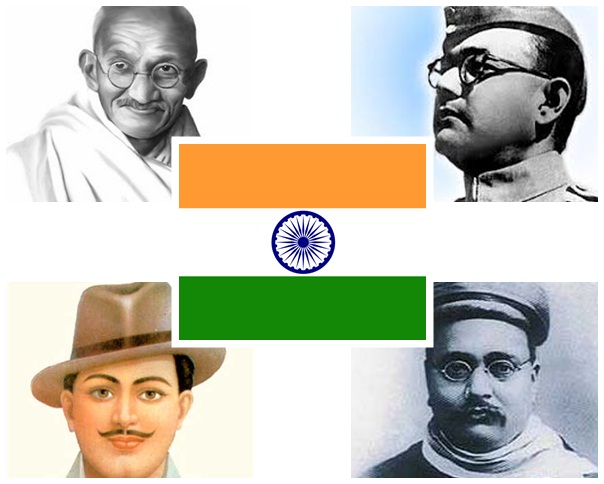 Punjab is known for the martyrdom of Bhagat Singh in the revolution against the British. A firm believer in the Marxist ideologies, he spread the fire of freedom movement throughout the then undivided Punjab. He motivated the youth of Punjab to join the Indian Independence Movement. Bhagat Singh was hanged at the age of 23. The Jallianwala Bagh massacre 1919 in Punjab was one of the deepest wounds inflicted to Mother India. Today, this historical site with a memorial dedicated to the martyrs is a tourist attraction in Punjab. The murder of British Police Officer John Saunders, the greatest of Bhagat Singh’s revolutionary activities, inspired the plot of the Bollywood movie, Rang De Basanti starring Amir Khan in the lead role. Chandra Sekhar Azad and Lala Lajpat Rai are the other noted revolutionary figures of Punjab.

If Bengal was instrumental in active revolution for freedom of the country, Gujarat in the west of India followed the path of non-violence, shown by Mahatma Gandhi, in protest against the British rule. Mahatma Gandhi, one of the most popular nationalists, was the axis of Non-cooperation National Movement all over the country. Some of the epoch-making historic events such as the “Non-cooperation” movement, Civil Disobedience movement “Quit India” movement and “Dandi March” were driven by his principle and leadership. He had initiated the country with the mantra, “Do or Die”. Sardar Vallavbhai Patel, an ardent follower of Gandhiji, is another name associated with the country’s freedom struggle in Gujarat.

The torch of Indian Independence Movement was borne throughout Maharashtra too. Among the freedom fighters of Maharashtra, Bal Gangadhar Tilak, Gopal Krishna Ghokhle, Vinayak Damodar Savarkar, Vinoba Bhabe and Dadabhai Naoroji were active nationalists and strong advocates of freedom. It was Bal Gangadhar Tilak who shook the nation with his call for “Swaraj” (self-rule). His voice, “Swaraj is my birthright, and I shall have it”, was echoed all over the country. He was one of the powerful vehicles driving the Boycott Movement and Swadeshi (Nationalist) Movement against the Partition of Bengal in 1905. One of the senior leaders of Indian National Congress, Gopal Krishna Ghokhle was a political mentor to Mahatma Gandhi. He had forced the British rulers of India to allow the educated Indians in the governing and policy making process.

The waves of national freedom movement were not so strong in South India as in the north, east and west of India. A few nationalists from the states – Tamil Nadu and Andhra Pradesh – had jumped on to the freedom struggle. U. Muthuramalingam Thevar, Chakravarti Rajgopalachari, V.O. Chidambaram Pillai, V.S. Srinivasa Sastri and Chempakaraman Pillai are a few mentionable names in this context. However, there were few revolutionary activities in those regions of India.

A visit to the above-mentioned states of India will make you live the bygone years of national freedom movement. It is a pilgrimage to Mother India. India Eagle wishes you Happy Independence Day!