Gujarat is going to represent India at the Academy Awards 2014. The Good Road, a Gujarati movie from the directorial repertoire of Gyan Correa, has been nominated in the Best Foreign Film Category for Oscars. The film, a gripping tale of a small boy in the backdrop of Rann of Kutch , has already bagged the National Award. It is being expected that The Good Road as India’s official entry to the world’s most prestigious award Oscars in the global cinema will promote Gujarat tourism abroad. 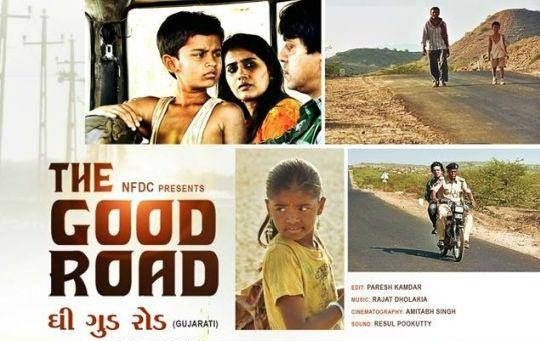 As many as 22 movies from different language speaking regions of India were in competition to go to the 86th Academy Awards. The films like Rakesh Omprakash Mehra’s Bhaag Milkha Bhaag starring Farhan Akhtar in the lead, Gauri Shinde’s English Vinglish starring Sri Devi in the lead, Ritesh Batra’s The Lunchbox starring Irfan Khan in the lead, Koushik Ganguli’s Shabdo, and Kamal Hasan’s Vishwaroopam were strong contenders. The final selection of The Good Road for the Oscars is an unanimous decision by the 19-member jury benched by eminent personalities including Goutam Ghosh, an eminent Bengali filmmaker, from different niches of Indian Cinema.

Of 22 movies on the shortlist, The Lunchbox was a strong competitor. But, The Good Road has been chosen over The Lunchbox because of the former’s story that explores the unknown India through the journey of a boy. The directorial debut by Gyan Correa, The Good Road has the makings of a documentary too. To say in the director’s words, the movie is a documentary style road drama, and the story is a slice of life.

In 2012, Anurag Basu’s Barfi! Starring Ranbir Kapoor and Priyanka Chopra in the lead was nominated as India’s official entry for the Oscars. Ashutosh Gowariker’s Lagaan starring Amir Khan (released in 2002) was the last Indian movie to have made its way to the list of final nominees in the Best Foreign Film category at the Academy Award. The other Indian films from Bollywood shortlisted for the top five were Mehboob Khan’s Mother India and Mira Nair’s Salaam Bombay.

India is sanguine of its entry, The Good Road, to the Oscars. The 86th Academy Awards ceremony will be held on March 2, 2014.

Indian Eagle represents India to the NRIs in USA and Canada. The lowest airfare to India for them is available on IndianEagle.com.