With Mother’s Day just round the corner, a mention of the Ima Keithel – Manipur’s Mothers’ Market is a fitting tribute, to the sacrificing spirit that embodies motherhood.Visit Manipur to see how women play an important role in trade and commerce. Visit Manipur to know why Khwairaman Bazar is the main landmark in Imphal. 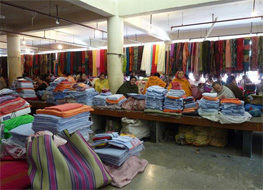 In the capital city of Manipur women don the role of entrepreneurs and run business’ eking a living, by running shops owned and operated by them alone.

It is called “Women Market” where only women are the sellers.The Khwairamband Bazaar is also known as Ima Keithel or Nupi Keithel. It is Asia’s second-largest women’s-only market.

Ima Keithel or the Mother’s Market has existed as a Manipuri tradition, dating back to the 16th century. The entire bazaar is set up in four concrete structures. It has gained name over time and emerged as the city’s unique travel experiences.

Textile, shawls, farming and kitchen appliances, like knives etc to edible foods like dried fish, dried shrimp, mushrooms,water beetles, freshwater edible snails called Tharoi, the local delicacy are available here. Fresh Flowers like Lotus and water lilies are sold in bulk. Bananas,melons,citrus fruits and pineapples the main additions of Manipuri diet get sold by the end of the day.

The speciality of the Ima Keithel is the Raja Mircha or the Bhut Jalokia. This Fiery chilly has 1,001,304 Scoville Heat Units (SHU). In other words, it contains the highest naturally occurring amount of capsaicin.

Snacks like egg pakora, puffed-rice and jaggery sweets that taste like chikkis, have a round shaped candied sugar atop.These local savories fly off the shelves, when served hot.

The water plant ‘Thangjing’ with a spiky rind is a rare delicacy.Seeds or nuts are relished with morokmetpa which is a paste of fiery chillies mashed with small fermented fish called ngari.The variety of products range from edibile bugs and herbs,betel nuts to dolls to yongchak or stinky beans, the oversized legumes in Thai cooking, Bamboo and wicker baskets all under the same roof.

Indian Eagle has cheap deals to Manipur. Fly at the Lowest Airfares, visit the exclusive “Ladies Only” Ima Market in Khwairamband Bazaar.You will be spoilt for choice and surprised at the business acumen of these enterprising women.