Just imagine what it would be like if a sky drive replaces the existing nightmarish road trip to and from Bengaluru’s Kempegowda International Airport (KIA). No need to ride a time machine for those surreal moments of super convenience much ahead of the present time!

Bengaluru, which grapples with dreadful traffic congestion during peak hours, is to get dedicated helicopter-taxi service to and from the airport. Helicopter-taxi service in Bengaluru, the Silicon Valley of India, would be the first of its kind in India. It’s a much needed relief from the sluggish pace of road journey not only for local commuters but also those on trips to Bengaluru from USA, UK, UAE, Singapore and other countries. 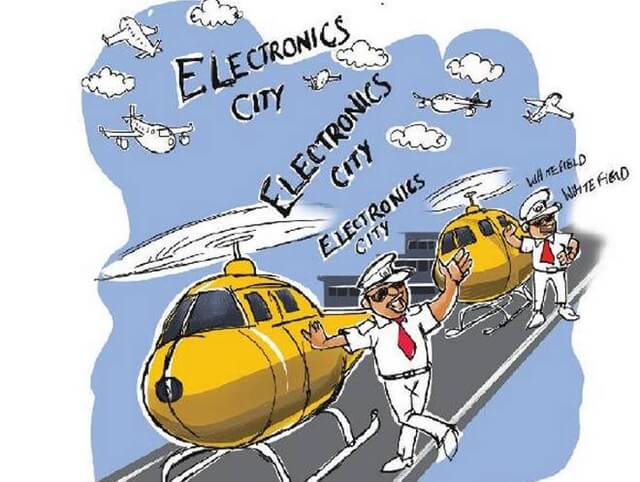 Frequent flyers to and from Kempegowda International Airport dread the clogged streets of Bengaluru. Bengaluru has a growing population of a little over one crore, and 67.22 lakh vehicles crawl the roads. With its inadequate civic infrastructure and lackluster public transit facilities, the city has fallen behind the ever-growing transport needs of both locals and visitors. Bengaluru’s road length has grown from 960 kms in 1974 to 13,000 kms in 2007 while the number of vehicles has increased by 6099% in the same period.

The uninformed traveller is in for a shock after disembarking their international flights to Benguluru. The boom in the number of vehicles has resulted in gridlocks slowing the traffic to snail’s pace during peak hours. The journey to and from Kempegowda International Airport, depending on traffic and destination, takes 90 to 180 minutes. Travellers in the city have to account for long hours of traffic in their plans to be on time for flights from Bengaluru to USA or some other country. To alleviate this hassle, KIA has launched a Helicopter-taxi service.

India’s first helicopter-taxi service in Bengaluru is expected to cut the travel time drastically. If the things go as planned, a typical journey between Bengaluru’s Electronics City and Kempegowda International Airport, which usually takes 120 to 180 minutes by road, is projected to be completed in 15 minutes. Initially, a Bell 407 chopper will be deployed for heli-taxi service between Kempegowda International Airport and Electronics City in Bengaluru.

Also Check Indians to Get Visa-free Entry to Qatar

Being a thriving IT hub of India, Bengaluru is a major destination for flights from San Francisco, Los Angeles, Washington DC, New York, Detroit, Newark, Boston, Beijing, Dubai, Tokyo, Singapore, Bangkok, Shanghai and other cities. San Francisco to Bengaluru is one of the busiest routes in the global network of international airlines. Those traveling to Kempegowda International Airport will be able to fly high like eagles above the snail-paced traffic on roads. Thanks to India’s first helicopter-taxi service in Bengaluru!