Unfortunately, Hurricane Irma has not lost much momentum even after wreaking havoc throughout Florida and the Caribbean almost for a week. According to the latest weather forecasts, Irma is staggeringly moving towards Atlanta causing chilly breeze and drizzles in South and Middle Georgia this morning. With the passing of the morning into day, heavy downpours and strong winds are expected in Atlanta Metropolitan Area. The world’s busiest airport, Hartsfield-Jackson-Atlanta International Airport (ATL) falls on the way of Hurricane Irma to Ohio and Illinois.

A state of emergency has already been declared in all 159 counties of Georgia, and a warning has been issued to Atlanta Metropolitan Area. Atlanta started preparing for eventualities as early as Monday morning. At the same time, Hurricane Irma will not be more powerful than a tropical storm by the time it reaches Atlanta’s Hartsfield-Jackson International Airport in late hours of the day, according to the National Hurricane Service. 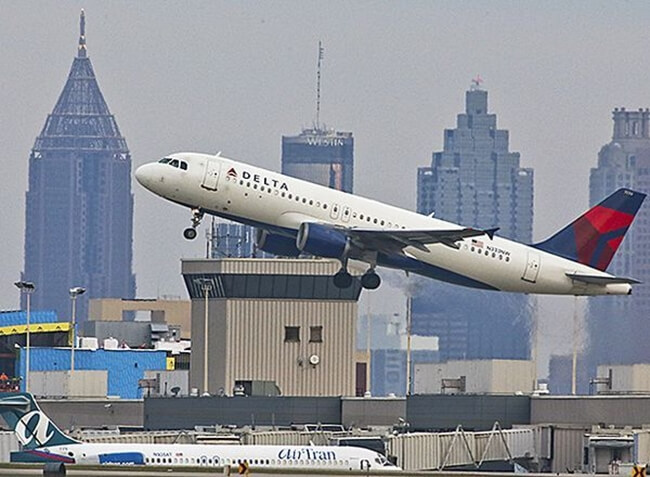 However, concerns about travel to, from and through Atlanta cannot be ignored even if Hurricane Irma loses velocity and becomes a tropical storm. Air traffic control stops operating when winds continue to blow at 55 mph or higher. Irma may not go below 73 mph by the time it reaches Atlanta International Airport. On Sunday night (yesterday), Atlanta Airport tweeted that high winds and rains could delay flight operations in 24 hours.

Atlanta is one of the major hubs for Delta Airlines flights to and from USA. Delta operates more than 80% of flights at Hartsfield-Jackson International Airport. Apprehending disruption of services from Monday afternoon through Tuesday (September 12), Delta requested customers to reschedule their travel dates and announced to waive change fees for it. The airline has already canceled 130 connection flights at Atlanta Airport, which were scheduled on Monday afternoon.

Those having confirmed Delta flight tickets dated between September 6 and 17 for traveling to, from or through Georgia airports Atlanta, Albany and Columbus are eligible for waiver on Delta’s change fee for rescheduling their travel (in the same class and on the same route) on or by September 30, 2017. If one’s confirmed travel on Delta is rescheduled beyond September 30 under the circumstances influenced by Irma, the change fee will be waived but fare difference may apply. In this case, rescheduled travel must be taken within one year from the date of the original issue.

Yesterday, Delta Air Lines also hinted at disruption of catering service for inflight meals under the impact of Hurricane Irma. The airline has also paused pet-in-cabin and baggage fees for those traveling through the Irma-hit cities and the cities likely to be affected.

We are at work 24×7 to assist our customers in rescheduling or canceling their travel to, from and through Atlanta and other cities in Georgia. We do appreciate your patience if you are not able to reach us over phone (1-800-615-3969) due to high call volumes. We are in contact with the airlines which operate flights to and from Atlanta Hartsfield-Jackson Airport and other Georgia airports. However, be advised to check your flight status (delayed or canceled) on the operating airline’s website.