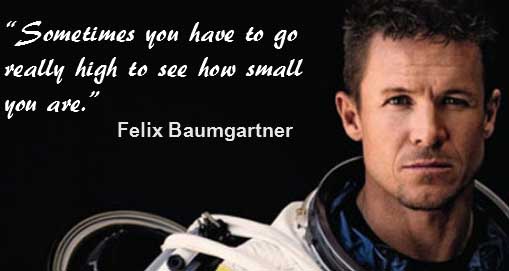 The daring feat by the 43- year- old Austrian set off a string of records into history. World’s first man travelling faster than the speed of sound without any traveling machine, highest jump ever in history, highest flight ever human on balloon.

The team effort paid off with training that took more than five years, to pull off  the mission without a hitch. The headlines making jump lasted a full 4 minutes 22 seconds.

A specially designed capsule combined with one of the largest helium balloon made the plunge under his mentor Retired Air Force Col. Joe Kittinger more remarkable as the previous record for all the three categories were held by Kittinger himself

Striking new grounds Baumgartner said, “The exit was perfect but then I started spinning slowly. I thought I’d just spin a few times and that would be that, but then I started to speed up. It was really brutal at times. I thought for a few seconds that I’d lose consciousness. I didn’t feel a sonic boom because I was so busy just trying to stabilize myself. It was really a lot harder than I thought it was going to be.”

The death-defying leap from the edge of space dubbed Baumgartner as “Fearless Felix”. Spectators were glued to their Television and YouTube, to catch a piece of the action, live. “Heart in your mouth” moment was experienced across the globe with Baumgartner’s tumbling, death-defying plunge, ending with a safe landing in the New Mexico desert.

The Austrian stuntman avoided looking down before the jump, said, “The exit was perfect, then I started tumbling. I thought I’d get it under control, but then it really started. I really picked up speed, it got very violent. It was really brutal at times”.

Cheered by his 100-strong support team, mother Eva and girlfriend Nicole Oetl , the achieved is the ultimate in his profession. Baumgartner is all set to take a plunge of a different kind. He plans to marry Nicole Oetl in the New Year.

Embarking on a new chapter “Fearless” Felix  plans to call it a day. Felix Baumgartner said “I’m retired from the daredevil business. I want to find a nice decent job as a helicopter pilot. I’ll fight fires and rescue people. No e-mails, no phone calls.”