The Government of India’s UDAN scheme has given wings even to the lower middle-class for domestic air travel since its inception in 2017. UDAN, a Hindi word for flight, is an acronym for Ude Desh Ka Aam Naagrik that means “May common people travel by air”. UDAN is a regional air connectivity development program that makes domestic air travel affordable for commoners from regional and remote areas of India.

Common people from remote areas, who have never been to an airport, feel at a loss while flying for the first time due to their unfamiliarity with airport signages and aviation vocabulary. Specifically, senior citizens feel helpless amidst a crowd of English-speaking urbane travelers with Bluetooth earphones plugged into their ears, and with smartphones keeping them connected to the virtual world. Anxious looks of first-time flyers from rural India are a common sight to behold at major airports. 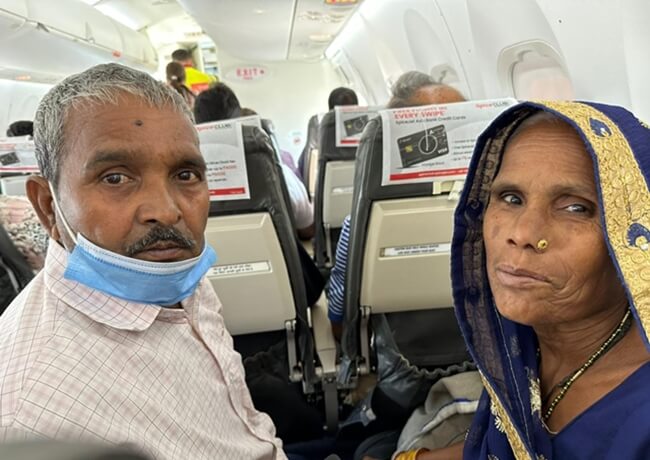 In one such recent instance at Delhi IGI Airport, an elderly couple from a remote village was waiting to board a flight to Kanpur. They were tired after an 8-hour bus journey to the airport. Unaware of the boarding process, they were hesitantly wondering whom to approach for help. Amitabh Shah, among other travelers in the boarding area, turned a good Samaritan for them. Following the elderly couple’s uneasy stare at others, he walked to them. With a smile, he asked where they were going.

Amitabh Shah is the Chief Inspiration Officer of India’s Premier CSR Implementor, Yuva Unstoppable. Knowing they were traveling to the same destination as his, Amitabh told them to follow him. This made them feel good and relaxed. Assuming that he worked for the airline, they followed him onto the plane for a flight to Kanpur in Uttar Pradesh. He requested a flight attendant to guide them to their seats.

Coincidently, they got seats in the row just before him. They gave him a pleasant smile in gratitude and asked him for one more favor. “Can you take our picture and send it to our daughter, so that she knows we are aboard the flight and safe? She has WhatsApp on her phone.” Amitabh shared this in his words on LinkedIn. He nodded within a blink of eye. He clicked a picture of the couple with his phone and sent to their daughter. It doubled their joy of flying for the first time.

Amitabh Shah went an extra mile to make the elderly couple’s first flight the first best experience. He keenly noticed they were hungry and thirsty. Since food was not complimentary, he told the airhostess to serve them paneer sandwiches and juice. He paid for the food without their knowledge and asked the airhostess to tell them the service was complimentary. On arrival at Kanpur Airport, he also guided them to the exit point where their daughter was waiting to receive them.

“Likewise, many senior citizens speaking regional languages feel helpless and puzzled while traveling alone on international flights to or from India, especially by American and European carriers. That’s why NRIs look for a travel companion for their visiting parents on flights from India to USA, Australia, Singapore, Canada, New Zealand, and other countries. If you come across an unaccompanied senior citizen on your flight, offer help and be kind to them,” said Sourav Agarwal, the Editor of Travel Beats, an overseas Indian community portal by IndianEagle.com.