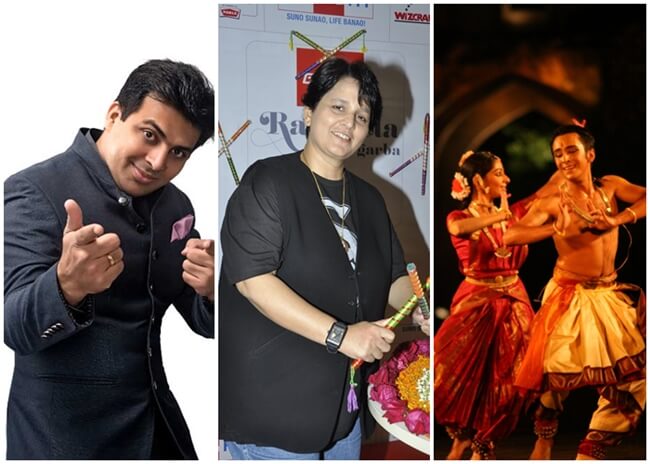 Among the not-to-be-missed Indian events in Dallas in September 2017, Falguni Pathak Dandiya & Raas Garba is hosted by Dhoom Production and is held at KBH Dallas Convention Center on September 16. Falguni Pathak, regarded as the Dandiya queen is very popular with the Gujarati community where she is called to perform for popular festivals like Navaratri. The popularity of Falguni Pathak is so huge that she was reportedly offered Rs 22 lakh for each day. The Indian Community in Dallas is in for a spectacular celebration this September.

The Telangana Peoples Association of Dallas, Texas is gearing up for the biggest Bathukamma celebration outside India. One of the highly anticipated Dallas Indian events in September 2017, Bathukamma and Dasara Sambaralu in Frisco attracts a crowd of 10,000 devotees from different Indian communities including Telugu in and around Texas. The Telangana Peoples Association of Dallas, a nonprofit organization, is all set with a great schedule of entertainment, including dazzling performances by popular Telugu actresses Regina Cassandra and Yamini Bhaskar. Interestingly, as many as 1500 women can play Bathukamma at the same time. 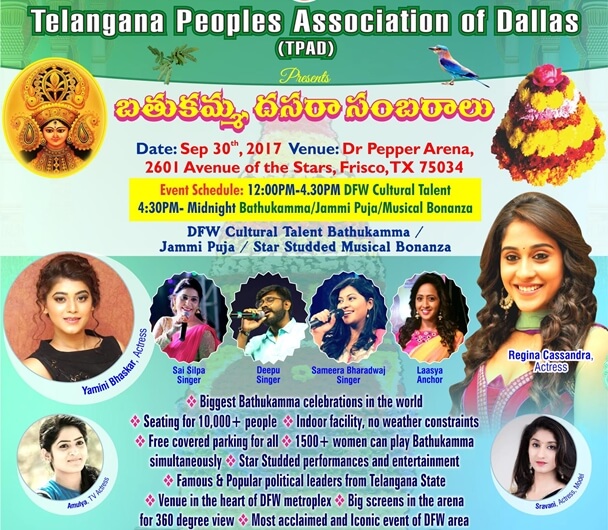 ShivYog – The Art of Self Realization

ShivYog is one of the most anticipated Indian events in Dallas in September 2017, especially for people seeking spirituality. ShivYog represents the state of being merged with the infinite consciousness. The Dallas Indian Community can submerge in the divine teachings of Avdhoot Baba Shivananad Ji on the art of self realization. This Indian American event is open to all and held at Irving Art Centre from September 7 to September 13 in Irving, TX.

NAVIKA, the acronym stand for North America Vishwa Kannada Association is a nonprofit grass roots organization created to promote and enrich cultural heritage of Karnataka. Touted as one of the best Indian events in Dallas in September 2017, Navika is an amalgamation of several cultural events that include Singing, Dance, Arts, Drama, Music, Talent Show and more. Being planned on a grand scale, the invited dignitaries and artists include Honorable Chief Minister of Karnataka Siddaramaiah and several other famous personalities from the state of Karnataka. The 4th World Kannada Summit will be held from Sep 01 to Sep 03 at Hyatt Regency, North International Parkway in Dallas, TX.

The Indian American Event ‘Sandhya’ is a performance by the renowned dancing duo Shijith Nambiar & Parvathy Menon. Among the top Indian events in Dallas in September 2017, the dancing duo is accompanied on Orchestra by Uday Shankarlal, Deepu Nair, R.K.Shiva Prasad, and Eeshwar Ramakrishnan. It is preceded by a presentation of summer workshop participants. Listed as one of the popular Indian events in Dallas in September 2017, it will be held on September 10 at Granville Arts center in Garland, TX.

Indian Americans in Dallas can laugh their heart out at the most famous Indian event in Dallas in September 2017. The stand-up comedian Amit Tandon will be in Dallas for a laugh riot on September 23 at Jack E Singley Academy in Irving, TX. The Amit Tandon show is undoubtedly one of the best comedy shows one would get to witness. Hosted by Pani Poori Productions, the advance booking for the show is going on in full swing. Book your ticket before it is late.

Travel Beats, a leading Indian American community magazine by Indian Eagle, publishes the latest travel, tourism, visa, immigration and community news apart from listing upcoming Indian events in US cities. Indian Eagle is a trusted travel partner of Indians in the US for booking their cheap flight tickets to India from Dallas and other US cities.