Nestled between the Western Ghats and Guaghar, Chiplun is popularly known for the river Vaishishti that meanders through the city.The hamlet of Chiplun has its roots in the ancient city with rich culture and religious ideology . Located 320 kms from Southern Mumbai, it is the fastest growing city in Konkan with a strong cultural background. 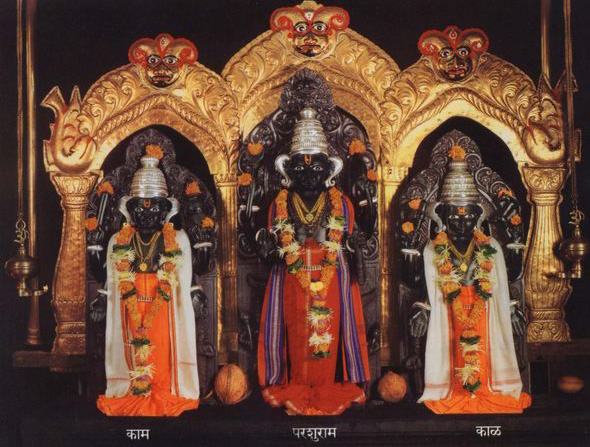 Literally meaning “The abode of Lord Parshurama” the sixth incarnation of Lord Vishnu. Scriptures record that Lord Parshuram stayed at “Mahendragiri” or “Parshuram Village” for his austerity after renunciation of his power.

Legend has it that Parashuram stocked Brahmans and supplied the area with sixty ponds and sixty gardens. All this took place within Chiplun. One of the ponds Ram-Tirth,  believed to be dug by Parashuram  holds water till date.

The Bandganga Lake, a major source of water supply was created by the 5 powerful arrows of Lord Parashuram.The Goddess Renuka temple dedicated to the mother of Parshuram was built behind the Parshuram Temple.

The temple situated at a height of more than 1000 feet from sea level has a unique architectural style. The temple has an idol of Parashuram in the center, God Brahma in right and Lord Shiva on the left. 300 years back, Brahmendra Swami reconstructed the temple and consecrated the idols for worship.

Indian Eagle recommends Chiplun renowed for its natural beauty with the Swatsada waterfall, Gowalkot Fort and Walvalkar Shivaji Museum. Boating on the Vashishthi stream and trekking  will be an ideal getaway. Book at www. IndianEagle.com for Lowest Airfare Guaranteed to Maharastra.