There are nearly hundred events in and around Chicago in October 2017. Being a month of festivities, October has a great schedule of Indian events in Chicago Metropolitan Area, including Diwali mela, Diwali fireworks, Bharatanatyam show, Rajasthani concert, Dandiya and Dussehra celebration. We at Indian Eagle filtered the list of Chicago Indian events in October 2017 and detailed the ten best below: 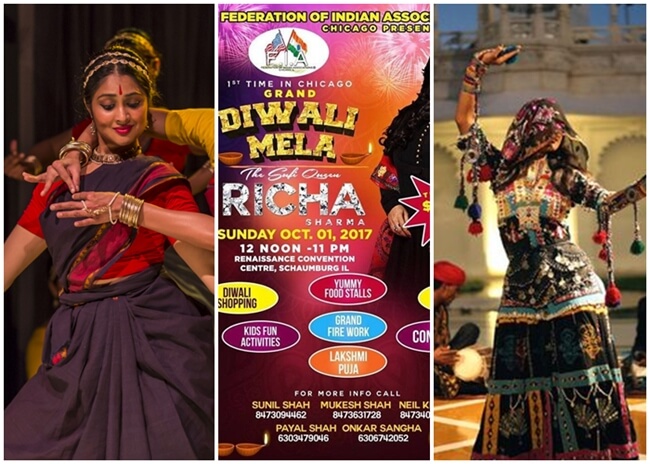 Among the major Indian events in 2017, Diwali will be celebrated twice by Chicago Desis in October. While the Federation of Indian Associations is hosting Diwali Mela on October 1 at the Renaissance Convention Center in Schaumburg, another Chicago Diwali Mela will be held on October 8 at Meadows Club in Rolling Meadows. Of the best Indian events in Chicago in October 2017, both Diwali Mela events promise an amazing time over cultural programs, dance contests, shopping spree, spectacular fireworks and lip-smacking Indian food.

Among the Chicago Indian events in October 2017, Pranita Nayar’s Unwinding – Decodifying Bharatanatyam on October 6 is not just a cultural performance but an edifying program for attendees from across Chicago. Pranita Nayar is a Bharatanatyam exponent having the 2017 Lab Artist Award from Chicago Dancemaker’s Forum under her belt. She will interpret the origin and evolution of this Indian classical dance form through her award-winning performance.

Illinois Indians are eagerly waiting for raas garba and dandiya events in Chicago in October 2017. Chicago Desis are reckoning Raas Garba Ramzat by Shree Jalaram Mandir on October 6 as one of the biggest Chicago Indian events in October 2017 as it will feature award-winning singers Damyanti Bardai and Mukesh Solanki. Indians in and around Chicago are full of buzz about dandiya and raas garba on October 14 as dandiya queen Falguni Pathak will fill the venue with her spellbinding tunes. Known for her energetic performance, Falguni will surely make the crowd go gaga.

Dance enthusiasts should not miss Spanda Dance Company’s NADI – Bharatanatyan Presentation among Indian events in Chicago in October 2017. The show will feature celebrated danseuse Leela Samsonwho will portray the moods of a river with a charismatic Bharatanatyam performance. Founded in 1995, Spanda Dance Company connects young Indian Americans with the cultural heritage of India through Bharatanatyam lessons from Leela Samson.

At Indian Eagle, our list of upcoming Indian events in Chicago in October 2017 includes Telugu Association of Greater Chicago’s Volleyball Throwball Indoor tournament on October 8. While throwball is for female players, men can partake in the volleyball category. Anyone having basic skills in volleyball can take part in the tournament as there are three separate categories (beginners, intermediate, advanced) for volleyball. Established in 1971, the Telugu Association of Greater Chicago brings together Chicago Indians for various events throughout the year.

Let October 14 come and Illinois Indians from Aurora City will gather for Diwali celebration organized by the Indian American Community Outreach Advisory Board. Unlike other Indian events in Illinois in 2017, the Diwali Festival of Lights in Aurora, a one-hour drive from Chicago downtown, is a most-awaited one. Many Chicago Indians attend the celebration every year and share the moments of spectacular firework.

On October 14, Chicago Indian Americans will have a tryst with the culture of Rajasthan at Rajasthani Caravan Concert, one of the popular Indian events in Chicago in October 2017. The Rajasthani Caravan Concert in Chicago will be a walk through Rajasthan’s folk culture, snake-charming Kalbeliya tribe’s spinning dance, flamboyant costumes, story-telling puppetry, traditional instruments and likes. Some of the UNESCO artists will accentuate the magic of the concert by playing Rajasthani folk, Hindi and Sufi music.

Chicago Telugu Indians are all set to have a gala time over Dasara and Deepavali in the last week of October 2017. The Tri-state Telugu Association is the host of the celebration among the events for Chicago Indians in October 2017. Telugu folk culture and Telugu food are major attractions of the event which will culminate in magnificent fireworks.

Popular Tamil actor and standup comedian, Karthik Kumar is about to tickle the funny bones of Indians in Chicago with his live show ‘Blood Chutney’ on October 28. Among the best Indian events in Chicago in October 2017, the show is supposed to make people laugh till they drop. Get ready to digest bitter pills of satire, sarcasm and criticism wrapped in comedy from Karthik Kumar’s repertoire.