Get ready to watch a documentary on the unifying power of food by none other than Michelin-starred chef Vikas Khanna, who made his culinary journey from his grandmother’s kitchen in Amritsar to New York through Indian taste buds. Expected to be the first of its kind among the existing popular food documentaries, Vikas Khanna’s upcoming documentary explores the unifying power of shared food experiences over socioeconomic barriers and communal divides.

Titled ‘Sexist Man Alive’ among the famous Indian American chefs by People Magazine in 2011, Vikas Khanna is currently busy shooting the documentary and looking to have it premiered at the Cannes Film Festival 2016. His documentary on the unifying power of food captures what revered personalities like Dalai Lama, Deepak Chopra and Mata Amritanandmayi think of food’s role in communal harmony across the world through interviews. 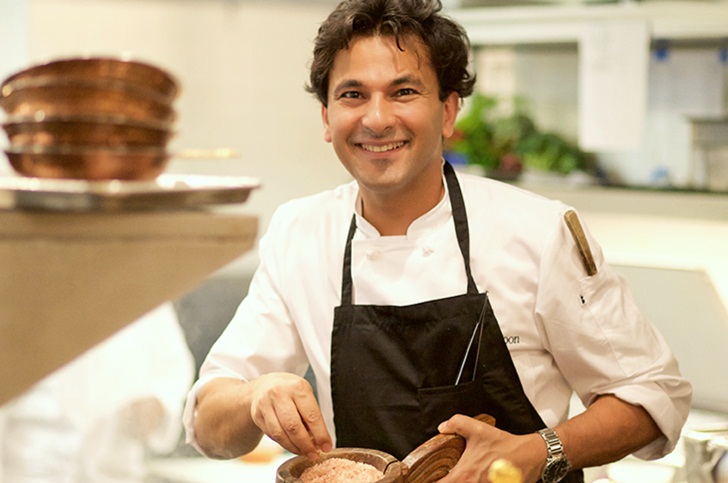 The 43-year-old Chef Vikas Khanna, who is now donning the hat of a documentary filmmaker, is a celebrated author too. He has a number of culinary books to his fame, including ‘Modern India Cooking,’ ‘Mango Mia,’ ‘The Cuisine of Gandhi,’ ‘The Spice Story of India,’ ‘Ayurveda – the Science of Food and Life,’ and ‘New York Chef Cooking for Life.’ ‘Utsav,’ the latest of all cookbooks authored by Vikas Khanna, weighs 15 kg and costs a whopping INR 8 lakhs. He dedicated it to the transgender community of India.

How the idea of making a documentary on the unifying power of food came to him is a matter of curiosity. He hit upon the idea during a research trip to Harappa in Pakistan a few years ago. While researching on how food was cooked in the Harappa Civilization, Chef Vikas Khanna discovered that daily cooking was a communal activity in those times and he did not find a single reference to the use of small cooking pots, which bears out to this finding. The fact that everyone used to get together for cooking and eating asserts his belief, “Unifying power of food was stronger even before religion came into being.”

Hindustan Times quoted him saying, “When I came to the US, I didn’t know anyone. On December 24, I landed up at a homeless shelter. They were preparing a Christmas meal there, and they shared their food with me; that made me feel like home. Food not only builds relations, but it also builds hope.”

Chef Vikas Khanna, who owns and runs Junoon, one of the best Indian restaurants in New York City, believes, “Neither any faith nor any religion talks about barriers.” Whether it is Judaism or Jainism, it talks about communal integrity and harmony from individual household kitchens to places of worship. That’s what the Michelin-starred chef wants to share with the world through his upcoming documentary on the power of food.