2020 was the most unprecedented year of travel suspension in the wake of the pandemic. 2022 is the most unprecedented year of flight cancellations and delays in view of the ongoing staffing shortage and other issues. This has given birth to a community of dissatisfied travelers with their pleas for refunds rising to a clamor. The reasons for flight delays, trip cancellations, and travel disruptions are temporary and will fade away sooner or later; but refund issues are likely to drag on and the number of complaints is likely to mount. 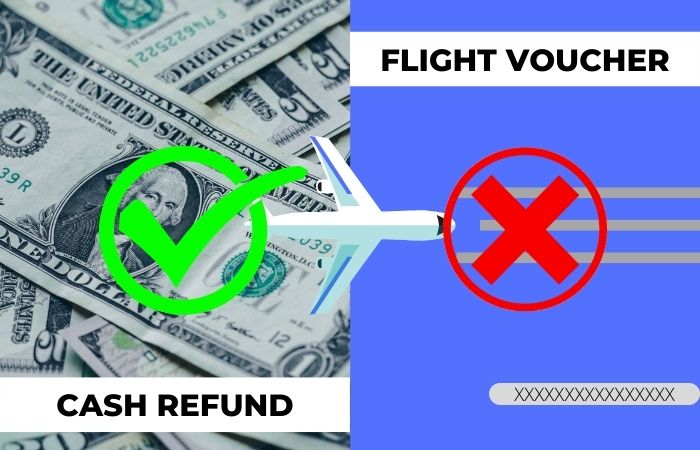 Democratic members of the US Congress have brought a bill onto the table in favor of US travelers’ right to cash refunds over credit vouchers. The proposed legislation – Cash Refunds for Flight Cancellations Act – requires airlines to credit refund amounts to their passengers within no more than 30 days of a flight being cancelled. If passengers are yet to be compensated for flights cancelled during the pandemic starting from March 2020, they reserve the right to ask for cash refunds retroactively, according to the bill.

He would like airlines to reimburse their passengers with flight credits or vouchers without expiration dates if the latter choose to cancel their trips on account of personal health issues, border closure, or travel bans. However, the US airlines that received a multibillion-dollar pandemic bailout, are required to give cash refunds rather than flight credits or vouchers with unlimited validity.

The Department of Transportation (DOT) is of the view that airlines owe a refund to their passengers if they modify an itinerary significantly by changing the actual departure or arrival airport, or by adding an extra layover in the itinerary. “When Americans buy an airline ticket, they should get to their destination safely, reliably, and affordably. The proposed legislation would protect the rights of travelers and help ensure they get the timely refunds they deserve from the airlines,” said DOT Secretary Pete Buttigieg during a media briefing.

In the proposal to the airlines, Pete Buttigieg asserts travelers’ right to refunds, regardless of ticket types, refundable or non-refundable. Passengers who buy non-refundable, cheap international air tickets are entitled to a refund if airlines make a significate change to their itinerary or flight schedule.

Both the Cash Refunds for Flight Cancellations Act and the DOT proposal came when the aviation sector is struggling with thousands of flight delays and cancellations per day, according to FlightAware tracking stats. Nearly 4500 complaints, mostly about refund delays, were reported to DOT in May 2022. While the number dropped by 15% compared to that in April, it was more than double the number in the pre-pandemic times. 87% of the passenger complaints filed with the Department of Transportation in 2020 were refund issues that the affected passengers fought tooth and nail for.

Inordinate refund delays by airlines gave us sleepless nights and restless days with our customers whose flights from USA to India and back were affected during the pandemic. Some airlines issued refunds in the form of credits or vouchers due to the mass cancellation of flights that caused their cash reserves to deplete. We had hard times convincing passengers that their hard-earned money was safe and that refunds would be credited to them though the timeline was unprecedently longer. However, that nightmare has been phased out,” said the chief customer relations officer of Indian Eagle, a most trusted air-ticketing partner of Indians in North America.