Badami formerly known as Vatapi in Karnataka has a rich legacy to it. It served as the regal capital of the Badami Chalukyas between 540 to 757 AD.The idyllic settings of the town with outcrops in rugged red sandstones rests around the Agastya Lake. 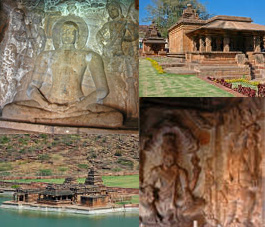 The 6th century town derives its current name from the ruddy color of the rocky cliffs, badam means Almond. Badami is famous for its rock cut cave temples which were  founded by Pulakesin I of the Chalukya dynasty. The carvings date back to the 6th and 7th century.The iconography revolves around the ideology of the Hindus, Buddists and Jains.

Each cave has a separate deity dedicated with sculptures and carvings. Cave 1 is dedicated to Lord Shiva, while Cave 2 and 3 has Lord Vishnu as the theme for the markings on the Cave. Jain Tirthankaras are depicted in cave 4 dedicated to the Tirtankara Adinatha back in the 12th century.Besides these natural cave formation Badami has various valuable carving of Buddha.

The entire town has carvings etched on boulders and caverns proclaiming the victory of the Chalukyas in the 642 CE.The region has an artistic aura to it. Facing the lake are two magnificent Bhutanatha temples. These 2 monuments are fine examples of early temple architecture.

Eighteen valuable inscriptions in old Kannada script are carved on a hillock. Written in Sanskrit the scriptures date back to 543 CE. This was during the reign of Pulakesi I (Vallabheswara).

The second inscription of Mangalesa from 578 CE.The third writings is in the Kappe Arabhatta record, poetry expressed in the three line meter.Indian Eagle has Lowest Airfares to Karnataka.Book your tickets at www.indianeagle.com for a visit to Badami for an insight into early inscriptions.