As the novel coronavirus continues to plague and panic the world, major sports events, international film festivals, technology conferences and concerts are being either cancelled or called off. Facebook cancelled its tech conference, F8 Developers, a very popular event in the developer and entrepreneurial community. In the US state of Massachusetts, Boston cancelled St Patrick’s Day Parade to the dismay of nearly 1 million attendees. Some of the major cancellations amid the coronavirus epidemic are Ivy League’s annual basketball tournament, Google Cloud Next 20, London Book Fair, and Korea Times Music Festival. Even, the Tokyo Olympics 2020 is awaiting an uncertain future. 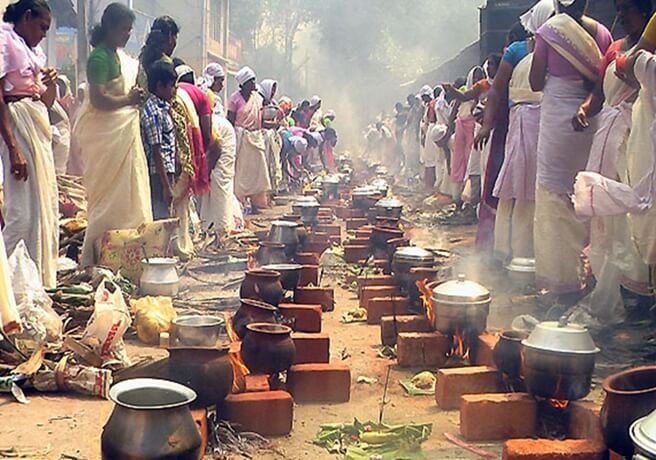 However, India celebrated the grandest festival of cooking pots in Kerala yesterday (March 9) despite the COVID19 threat lurking around. The number of positive COVID19 cases in Kerala has risen to 14, including the first three which have been cured, but the God’s Own Country could not help witnessing the religious fervor and cultural exuberance of more than 2.6 million women during the annual Attukal Pongala festival in Thiruvananthapuram.

If there were no high alert over the novel coronavirus outbreak in Kerala, more than 3 million women devotees would have turned up for the Attukal Pongala festivity at the Attukal Devi Temple, the Sabrimala of women in Thiruvananthapuram, according to the temple priests. Kerala government’s nod to the Attukal Pongala festival – the largest congregation of women devotees on earth – in the face of COVID19 invited criticism that the situation was being taken out of the frying pan into the fire.

However, the state government put a rigid anti-coronavirus strategy in place to contain the transmission of COVID19 at the largest gathering of women devotees on the tenth day of the festival. An extensive list of precautions including dos and don’ts was issued to the devotees and visitors. The entire festivity was held under strict vigil this year. Lakhs of face masks were distributed to the women. Reportedly, the temple authorities made sure that every directive about the necessary precaution against the novel coronavirus, from the district health department, was strictly followed.

The railings that separated every two rows of women from each other to help maintain the order at and around the temple were cleaned and disinfected with a bleach solution every half an hour. The Attukal Devi temple trust employed the temple cleaning staff equipped with the knowledge of precaution over the Coronavirus outbreak to disinfect the areas that devotees were likely to touch frequently. Instead of soaps, handwash dispensers were put here and there at the temple complex. Several ambulances and health experts were deployed across a radius of 10km around the temple.

A Guinness World Record holder for the biggest gathering of women in a single event, the Attukal Pongala festival is observed by lighting brick hearths, cooking Pongala (a porridge made of rice, ghee, jiggery, coconut and other ingredients), and offering it to the presiding deity, Goddess Attukal Bhagavathy.

The city of Thiruvananthapuram comes alive as a holy ground across a 5-10 km radius around the temple thronged by tens of lakhs of women from all over the country, mostly Kerala and Tamil Nadu. The cultural milieu around the festival of cooking pots and brick hearths in Kerala is simply a grand spectacle to behold. The cooking of Pongala in earthen pots is accompanied by musical recitation and various rituals.

Subscribe to Travel Beats, a leading overseas Indian community portal, for latest Indian Diaspora stories, US visa & immigration news, and air travel to India updates. Travel Beats is a subsidiary of Indian Eagle, a trusted travel-booking partner of NRIs, OCIs and PIOs, with a proven record in booking confirmed flights to India for guaranteed low fares.