The Atlanta Indian American community will be having an exhilarating time as the calendar of Indian events in Atlanta in September 2017 is full of cultural and musical programs. The Atlanta Indian community events in September include a couple of musical extravaganzas clubbed with cultural activities. Indian Eagle has listed and detailed the five best September 2017 events for Indians in Atlanta. 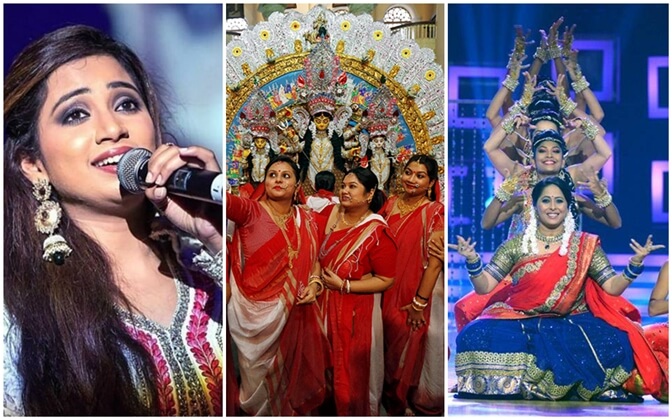 The Indian community in Atlanta is about to embark on a musical journey with renowned Bollywood singer Shreya Ghoshal. The concert on September 10 is among the best Indian events in Atlanta in September 2017 as Shreya Ghoshal will mesmerize the audience with popular songs from her albums. One of the sensational September 2017 events for Indians in Atlanta, it will be a treat to the Bollywood music lovers in Georgia. Being hosted by Paracha Entertainment, the event will be held at Sugarloaf Parkway in Duluth.

The BAGA (Bengali Association of Greater Atlanta) is organizing one of the most important religious Indian events in Atlanta in September 2017. The Atlanta Indian community is cordially invited to join the festivities: Mahalaya and Durga Puja. This is considered one of the biggest celebrations of Durga puja in USA 2017. The Mahalaya is scheduled on September 23, and Durga Puja from September 29 to October 1 at Northside Drive Northwest, Atlanta, GA. Indian traditional wearis recommended to those who attend the event.

The OshoFest is a spiritually charged event that has been taking place at the Red Top Mountains for the past four years. The various sessions of the OshoFest event will transport you into a deeper state of inner peace, balance and harmony. In a synergy of spiritual seeking, OshoFest offers an opportunity to enjoy Osho meditations and celebrations in sync with the beats of live music and divine vibes.The Atlanta Indian community is blessed to witness the OshoFest LIVE music and mediation festival under the tutelage of renewed spiritual master Osho. This event is considered to be one of the best spiritual Indian events in Atlanta in September 2017 and is scheduled on September 29 at Cartersville, GA.

The Dance Fever with Geetha Kapur is one of the most awaited Indian dance events in Atlanta in September 2017. This Indian American dance event is touted to be the biggest dance championship categorized as juniors, teens and adults. The Dance Fever reciprocates the Indian culture and includes Classical, Folk and Bollywood dance styles. This Indian American event is scheduled to commence on September 2 at 10:00 AM at Infinite Energy Arena, Duluth, GA and is hosted by Anand Entertainment. Come and set the stage on fire at Dance Fever 2017 with Geetha Kapur.

With over 1000 shows across the world, it is Amit Tandon’s maiden tour to America. Amit Tandon is fondly known as “The Married Guy” for the reason that he realized after one marriage and two kids that it could not get any more worse and took up comedy. His comedy videos go viral on social media with over 40 million views. With an impeccable track record, the Amit Tandon LIVE in Atlanta is one of the most awaited Indian events in Atlanta in September 2017. It will take place in Ashiana Banquet Hall, Norcross, GA on September 08. Block your date to witness the epic comedy show.

Travel Beats, a leading Indian American community magazine by Indian Eagle, publishes the latest travel, tourism, visa, immigration and community news apart from listing upcoming Indian events in US cities. Indian Eagle is a trusted travel partner of Indians in the US for booking their cheap flight tickets to India from Atlanta and other US cities.