Giving life to someone on the verge of death is the greatest act of humanity. Organ donation is the biggest and most generous gift in the world. Donating organs to someone in need requires a lot more than one’s willpower. It is the love for him or her that one would donate an organ to him or her. Indian American Anil Srivatsa realized it when he donated a kidney to his brother in 2014.

With this epiphany, Anil Srivatsa became a champion of the organ donation drive named ‘Gift of Life Adventure’. An entrepreneur in New Jersey, he is on a mission to spread the message that love is the beacon for selfless organ donation in the world replete with greed. It has taken him across 43 countries where he narrated his story to about 75,000 people and created awareness about organ donation. 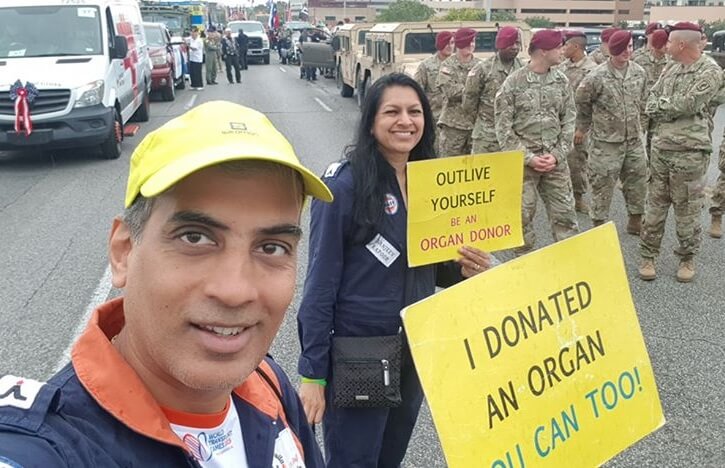 Anil is accompanied by his wife Deepali during their worldwide campaigns of Gift of Life Adventure – a series of expeditions for a noble cause. The Indian-origin couple has traveled a distance of 100,000 kms and been on the road for more than 400 days. They cook and rest in their car during stopovers en route unless they come across a kind-hearted folk who offers them decent food and shelter.

He demystifies the facts of organ donation and busts the myths around kidney donation in particular through his talks at community centers, temples, schools, colleges, nonprofits and offices. He does also speak of his initial fears about kidney donation that many people experience overwhelmingly. He also elaborates on the legal and other issues that demotivate people about organ donation. He encourages people to get over superstitions surrounding organ donation – the noblest act of humanity.

A former host of a Limca Book record holding radio talk show in the United States, Anil Srivatsa will embark on a new organ donation awareness drive from New York to Argentina in March 2020. Rotary Clubs have joined his cause. Anil and Deepali collect and share real-life stories about organ donation from different walks of life.

Travel Beats, a leading overseas Indian community portal by Indian Eagle Travel, strives to promote good news and inspiring stories of Indians abroad with focus on Indians in USA. Indian Eagle is a leading international travel booking organization with the vision and mission of making flights to India from USA cheaper and better.