Home / News / This 21-month-old is an Indian Prodigy of Global Fame. He Makes it to World Book of Records 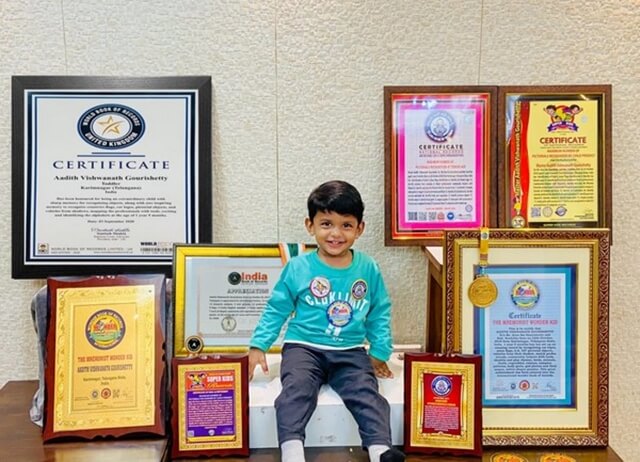 21-month-old Aadith Vishwanath Gourishetty from Karimnagar, the city of granites in Telangana, has made it to the World Book of Records for his extraordinary memory skills. Before earning international recognition, he secured his name in the Indian Book of Records and the Telugu Book of Records. While kids of his age listen to grandparents’ lullabies and watch nursery rhymes on the Internet, Aadith is strengthening his cognitive abilities.

At this tender age, Aadith can easily identify birds, animals, fruits, flags, colors, body parts, English alphabets, household appliances, professions, logos, among many other things by just seeing their pictures. The toddler’s grandparents were the first to discover his natural ability to recognize pictorial objects from images. One day they noticed him identifying images of gods and goddesses with no difficulty. One evening when he was sitting beside his grandmother in the puja room, he readily recognized the deities, including Venkateswara Swamy and Sai Baba. He effortlessly recollected the names of various gods several other times.

Then, Aadith Vishwanath Gourishetty’s parents decided to test his inborn memory power. They showed him a picture of the Indian Tricolor. A few days later when PM Narendra Modi was hoisting the flag at Red Fort on August 15 this year, Aadith started giving salutation to the flag while watching the program on television. The moment not only took them aback, but also filled them with pride. They realized that their son was born with sharp memory as an innate quality as he was able to identify the flag only by seeing its picture once.

Aadith Vishwanath Gourishetty, who has earned the prestigious titles – ‘Super Kid’ and ‘Mnemonist Wonder Kid’ – can recognize and recollect 272 pictorial objects from 17 categories. Interestingly, he can identify sounds of animals, complex color patterns, and different vehicles from their shadows.

His parents started showing him the national flags of other countries. Aadith did not disappoint them. He effortlessly could identify the flags. It was then his journey began towards securing his name in the Indian Book of Records, and the World Book of Records. “At this age when a child finds difficulty in remembering all his toys, Aadith could recognize the flags and logos, a task which is tough for even for adults,” Aadith’s mother Snehitha told ANI.

“Early in 2020, 5-year-old Aashman Taneja from Hyderabad set a Guinness World Record. This extraordinary Taekwondo player is a USA World Open Taekwondo Silver medalist too. He earned the Guinness World Record for making more than 1200 full-contact knee strikes nonstop in one hour. Indeed, Hyderabad is a cradle of prodigies,” said the Editor of Travel Beats, a leading overseas Indian community portal.

This story is part of our continued effort to promote achievements of Indians in USA, at Travel Beats – a subsidiary of Indian Eagle Travel. Subscribe to our free newsletter for latest community news, exclusive stories, US immigration policies, and first-hand US-India travel updates.