The only greatest Music Awards those matters, the Grammy’s took off to a flying start at Staples Center in Los Angeles. The 55th Grammy Awards will hand out their gramophone-shaped trophies in more than 80 categories. Elton John, Ed Sheeran, Miguel and Wiz Khalifa ,Alicia Keys took centre stage banging on two drums, collaborating with Maroon 5 for her single “Girl on Fire.” 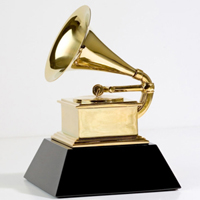 Opening act by Country-pop singer Taylor Swift set the ball rolling, with a live performance of “’We Are Never Ever Getting Back Together’ nominated for Record of the Year. The clown-filled, Alice in Wonderland-esque opening song was followed by introduction of the Host LL Cool J.

“We Are Young” by indie-pop trio FUN swept the” Song of the Year: the top award for achievement in songwriting. It is co -written by FUN members Jack Antonoff, Nate Ruess and Andrew Dost.

“Somebody That I Used to Know” by Australian artist Gotye took home the “Record of the Year”.

Album of the Year went to “Babel” from Mumford & Sons while Carrie Underwood won Best Country Solo for Blown Away. Original songs influenced by Marley as well as a group cover of his classic number “Could You Be Loved.”

The 2013 MusiCares “Person of the Year” went to the Boss”Bruce Springsteen”.

Sitarist Anoushka and singer-songwriter Norah Jones accepted  two posthumous Grammys on behalf of their father sitar legend Pandit Ravi Shankar. Exactly 60 days after his death, the Lifetime Achievement Grammy award was given for introducing  Indian classical music to the West.

Pt Ravi Shankar also won the Best World Music Album award for The Living Room Sessions Part 1. Anoushka who was nominated in the same category for her album ‘Traveller’.