There is a history of foreigners adopting orphan kids from India. Orphanages in India house as many as 20 million kids, according to a 2018 study conducted by SOS Children’s Villages India, an international charity for orphaned and abandoned children. The number of orphans in India is likely to increase by 2021. Foreign nationals adopt 600 to 800 abandoned or orphaned Indian children annually. In 2018, Elin Kristin Eriksson, a nurse in Sweden, adopted an 8-month-old baby girl from Rajasthan, who was abandoned right after her premature birth and left to die on a railway track.

In one such instance of adoption of Indian orphans by foreigners, a 2-year-old boy with a rare disease from an orphanage in Hyderabad found home and care in the United States. Laura Dellicker, a nurse from the US state of North Carolina, adopted him in 2018 and became a proud single mother. 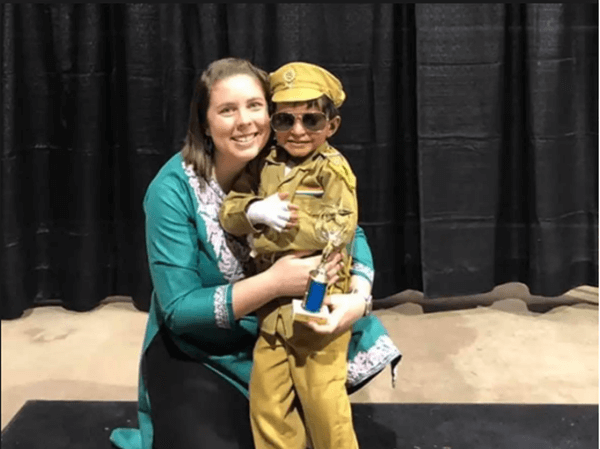 Picture Credit: The Times of India

Salim is affected by Epidermolysis Bullosa, a rare skin problem which is also known as butterfly disease. The moment Laura met Salim at an orphanage in Hyderabad she made up her mind to give him a new lease of life. Neither his religion nor his rare disease bothered her to give a second thought to her decision.

It has been a year since Salim was brought to the US. Though adopted by an American, he is very close to whatever is Indian in Chapel Hill, North Carolina. He binges on Hyderabadi biryani, takes Indian dance lessons and participates in various cultural events that the Indian community of Chapel Hill organizes for kids – which keep his umbilical cord with India alive.

Nursing Salim’s rare skin ailment is a bigger challenge, which Laura accepted while embracing single parenthood, than making sure to nurture his Indian roots in the USA.

Epidermolysis Bullosa is a rare skin disease which causes the upper layers of one’s skin to fall off or blister acutely even at a mild touch or friction. The discontinued production of collagen 7, a hormonal protein that binds the layers of skin together, is the root cause of the disease that Salim is affected by.

The blisters all over Salim’s body are dressed with special bandages. The adoptive mother spends several hours dressing his skin and changing bandages daily. The blistered part of his skin requires complete protection from dirt and dust. The cost-intensive medical care for Salim does not bother Laura, as she has health insurance for him.

One of Laura’s friends has a son suffering from the same ailment, which is why she adopted Salim in spite of knowing about his disease. Initially, it was not easy for Salim to call Chapel Hill his home thousands of mile away from Hyderabad, India, as the neighborhood kids’ curious stare at the bandages all over his body would cause discomfort to him.

However, Salim began to feel at home in Chapel Hill, North Carolina with time passing on and made friends with most of the kids in the neighborhood. Today, both Laura and Salim share an abode of bliss under the same roof.