The major landmark of Secunderabad, the St. John’s Church is celebrating 200 years in the capital of Andhra Pradesh. The bicentenary celebrations are no mean feat, making it the oldest church consecrated and dedicated in 1813. It catered to the spiritual needs of the British forces stationed at Lancer’s Line. 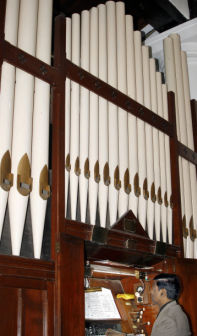 The structure was built in cruciform-having the shape of a Cross. The rare style of Tuscan architecture makes the church stand out among the modern buildings.

The church also has a rare 100 year old Pipe organ. The pipe organ adorning the chapel with its ivory colored façade pipes, is played with the feet. Unlike the piano, the pipe organ has about thirty large-sized keys, called the pedal clavier.  The black pedal keys are as long as one’s palm, while the white ones as long as one’s arm.The pipe organists plays these pedal notes with his heels and toes.

The bulky instrument stands at 10×15 feet. The pipe organ houses 590 pipes arranged in 10 ranks based on their timbre and pitch, mounted vertically on a wind-chest.

The church also has a bronze eagle shaped lectern from where portions of the bible are read out. It is made of black granite which stands prominently inside the structure.

The stained glass depicting John the Baptist, located above the altar is a creative marvel. The colors of the glass gleam when sunlight filters through the glass.

The structure patterned in Minton tiles was given the Heritage Award by Indian National Trust for Art and Cultural Heritage in 1998.