Three-time Grammy winner, Indian sitar maestro Pandit Ravi Shankar will receive the lifetime achievement Grammy award, posthumously. The legend died this week at the age of 92 in California. He is among the seven artists including Carole King and the Temptations named as the honorees. 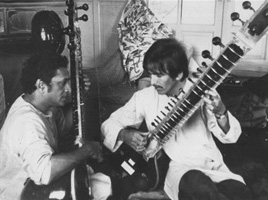 The world’s most renowned sitar player and a true ambassador for international music Pandit Ravi Shankar was a performer, composer, teacher and writer. He has the rare distinction of being a pioneer in introducing Indian music to the West.

Shankar’s friendship with the Beatles legend George Harrison was a catalyst in introducing Harrison to Indian philosophy. His collaboration with Harrison was evident at their appearance for the epic Monterrey and Woodstock music festivals in 1960s.

“Ravi was the first person who did not try to impress me but in turn I was impressed by him,” said George Harrison about the iconic musician in Martin Scorsese’s documentary ‘George Harrison: Living In the Material World’.

Pandit Ravi Shankar connected the music of the East to the West, by elevating it beyond performance and appreciation.His brainchild, Concert for Bangladesh, turned into a social and political cause.

The latest album “The Living Room Sessions, Part 1” has received a 2013 Grammy nomination in the best world music album category. He has passed on his musical prowess to his daughters Norah Jones who won five Grammy’s and Anoushka, who is also a Grammy nominee. The rich contribution of the musical genius will live far beyond his passing.