“The fault is not in our stars, but in ourselves.” Shweta Katti from a Mumbai brothel realized the underlying meaning of the Shakespearean proverb when Radha, a neighboring sex worker, told her that she would end up becoming a sex worker like her if she did not study. This helped Shweta not only find her destination but also become an agent of change for young victims of abuse in Kamathipura, one of Asia’s most infamous red light districts. She is the first from an Indian red light district to secure an international scholarship of $30,000 and study abroad.

Today, Shweta Katti who journeyed from the confines of a bleak world to the United States for a life of dignity is a beacon of hope, a guiding star, an emblem of courage, and an idol of triumph over adversities for those women who struggle to rise above their marginalized environs. Born to a sex worker and brought up in Kamathipura, Shweta fought hard to rewrite her destiny and embark on a transformative journey – which, in turn, inspired others. 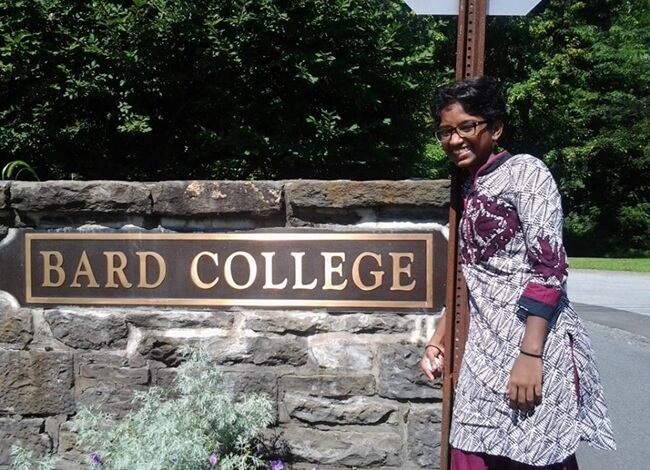 She went on to earn several prestigious awards, including the UN Youth Courage Award in 2018. All this was possible because of her mother and an Indian-origin social activist from the US. Despite being a sex worker herself, Shweta’s mother made sure that her daughter attended school, led a life of dignity outside Kamathipura, and stayed out of the profession that the world looks down upon. However, hardship was an integral part of her life until the age of 16. She was even sexually abused by her abusive step father when she was just 12 years old.

As it is said that every dark cloud has a silver lining, Robin Chaurasiya from Chicago came to Shweta’s rescue from Kamathipura. After being forced to quit the service as an Air Force officer in the US due to her sexuality, Robin founded an NGO called Kranti (Revolution) in India and started teaching daughters of Mumbai’s sex workers. Many beneficiaries of Kranti, including Shweta Katti, have become community leaders and social reformists empowering socially ostracized girls and women. She was one of the top 10 finalists for the one million dollar Global Teacher Prize in 2016.

“My mother has always supported in my endeavors. Without her, I would have never reached this far. At night I would hear the sex workers getting beaten up by their drunken husbands. No one respects you when you are in this profession. It is highly unsafe for women and young girls to live in a brothel where spending childhood is very tough,” Shweta said uninhibitedly.

It was Robin Chaurasiya’s Kranti where Shweta was rehabilitated through counseling and therapeutic sessions. Thus she was able to muster her courage to face her grim past instead of being haunted by it. After she proved to be a promising girl, Kranti helped her secure a scholarship from New York’s Bard College, and arranged her passport and visa for travel to the US in 2013. She majored in psychology as she intended to help many other girls like her gain confidence for uplifting themselves. She had toured India addressing victims of gender discrimination and sexual abuse before she traveled to the US.

Newsweek featured Shweta Katti, along with Malala Yousufzai, on its ‘25-Under-25 Women to Watch’ list for her efforts towards uplifting of marginalized girls. For the same reason, she was made Consul General of Canada for a day, on the occasion of International Day of the Girl Child in 2017.

Shweta’s message to girls from the socio-economically disadvantaged background, “Every girl can do anything she sets her mind to. There are people who will always be there to pull you down but you have to claim your own space. It’s in your hands and you have to let your power shine through. I’m very proud to be a girl and there’s a certain kind of beauty that courses through my veins because of it. I want girls to know that they are beautiful and have immense power that only needs to be channeled correctly.”