Jodhpur has found favor in the sight of both Bollywood and Hollywood.What is this endearing quality that Jodhpur possesses, is still a mystery. Is it the Thar Desert with unending sand dunes or the imposing Forts that have stood as silent witnesses, as History unfolded? 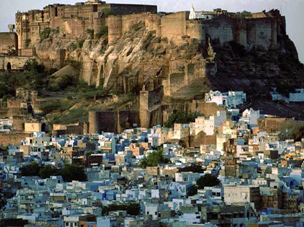 The answer maybe lies in the eye of the beholder, who is immediately drawn into the arid region with a magnetic quality about it.The major draw at Jodhpur is the tourist spot, Mehrangarh Fort. It has been chosen as a venue for many big events and film shootings.

A special mention has to be made of the Fort which has captivated the attention of Hollywood Director Christopher Nolan.He made it a point to incorporate atleast a few shots of Jodhpur.

The ‘Dark Knight Rises’ the final installment in the Trilogy, had a couple of scenes shot against the backdrop of the Mehrangarh Fort. This landmark Fort in Jodhpur,is one of the largest in India.

Set within natural surroundings, the Fort at 400 feet is enclosed by imposing walls.The intricate boundaries within has imprints of cannonballs targeted to beat the enemy.The Fort chronicles victory at the “Jayapol (meaning ‘victory’), built by Maharaja Man Sing celebrating his victories over Jaipur and the Bikaner armies. The Fattehpol gate which also means ‘victory’ was built by Maharaja Ajit Singh to mark the defeat of the Mughals. The palm imprints upon these still attract attention even today.Tourists make a beeline to photograph the palm imprints on the walls, that have been an archaeologists delight.

The Fort has a museum with royal palanquins, including the domed gilt Mahadol palanquin, which was won in a battle from the Governor of Gujarat in 1730.The museum has rare exhibits from the reign of the Rathores.

Take a walk into the past history of Jodhpur. The exhibits at the Mehrangarh Fort with arms, costumes, paintings and decorated period rooms give a glimpse into the rich lifestyle of the Kings that once reigned in Rajasthan.

Indian Eagle offers the best prices to Rajasthan. Book at www.indianeagle.com to decode into what the Director’s of Hollywood see, Visual Magic!!!