Gandhi Jayanti is declared as a National Holiday in India to celebrate the birth of Mahatma Gandhi or Bapu. Author of the Non-violence movement, his ideology continues to influence and ignite new movements till date. 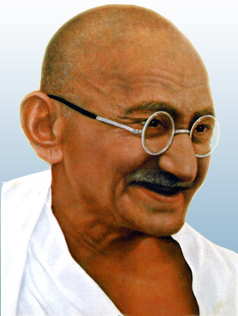 The United Nations had declared  that Gandhi Jayanti will be observed as the International day of non- violence on 15 June, 2007.

Mohandas Karamchand Gandhi was born on 2 October, 1969. A lawyer by profession, he pioneered many movements like the Satyagraha. A pro-active believer of Ahimsa or Non-Violence, peace was his ideal weapon to counter with the compelling British tyranny.

Seeking to solve the twin problem of unity and identity of India, the idea of universalization of the Freedom struggle emerged under his aegis to set a new stage in Indian history.

Debates and Essay writing Competitions are held magnifying the philosophy and belief system of Bapuji who won the hearts of millions around the world. His favorite devotional song ‘Raghupati Raghava Raja Ram’ is played in street corners, with skits and plays enacted to commemorate the indomitable spirit of the Mahatma.

Schools, banks and government offices remain closed to mark the occasion. In honor of his patriotic spirit the Indian Government has minted rupee notes and issued postage stamps carrying the image of Mahatma Gandhi. In 1948, a 10 rupees stamp was sold at a whopping US $205,000. The auction held at Geneva in May 2011, set a record as the highest priced modern stamp from any country.

Mahatma Gandhi’s memorabilia were auction in London recently at an undisclosed amount .Such is the eagerness to gain an understanding into the character of the Mahatma.

The legacy that Gandhiji has left behind has been carried on to this day. His philosophy has transcended beyond limitations. To mark Gandhi Jayanti, 10,000 couples from Gujarat will be pledging to stop Female Foeticide. 5,000 women will be leading a procession holding the Indian Flag to raise awareness against the dreadful practice.