The festival of Chithirai Thiruvizha is celebrated during the month of Chitirai which falls in the month of April. The month long festival is one of the longest that the festivities are divided into two. 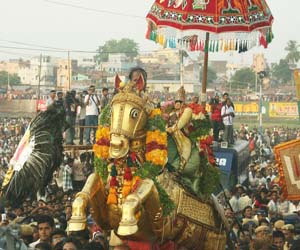 The first 15 days of the festival are in celebration of Goddess Meenakshi.  The remaining 15 days are celebrated for Alagar (A form of lord Mahavishnu).The events  unfold as:

Yetram : The chief priest of Meenakshi temple hoists the Holy flag on the KodiMaram (Flag post) of the temple declaring the opening of the month long celebration.

Pattabisekam: The coronation ceremony when Meenakshi is crowned as queen of Madurai and rules the Pandya Kingdom for the next four months. Lord Sunderaswarar, her husband will be crowned as king  for the next eight months.

Dikvijayam : The warrior Princess goes to war and conquers the world.She falls in love with Lord Shiva when she goes to Kailaayam – The Place of Lord Shiva in the Himalayas.

Meenakshi Tirukalyanam : The traditional wedding of Meenakshi amman and Lord Shiva is celebrated in opulent style and grandeur.

Ther Thiruvizha : The procession after the wedding, when the King and Queen of Pandya Kingdom Lord Sunderaswarar and Meenakshi  come to see their citizens in a beautifully decorated chariot.

Etir Sevai: When Alagar enters Madurai city and the people of the city welcome him.

Alagar Vaigai Elenthuarulal: Lord Alagar reaches the wedding of his sister a day later.He returns back to Alagarkovil after giving  gifts to Meenakshi and Sundereswarar. This takes place in a mandapam in the middle of river Vaigai.

Indian Eagle has great deals to Madurai. Make your booking to the Land of many temples- Madurai.Witness the festival of Chithirai Thiruvizha chronicle and reconstruct the events as they happened. Book before April at www.indianeagle.com