Hollywood fraternity visiting India for a shoot was a farfetched idea, to even consider in the past. The scenario is undergoing a sea of change with technology and innovation bridging the distance. Ironically, Hollywood filmmakers are heading towards India for its ethnic beauty, while Bollywood lo 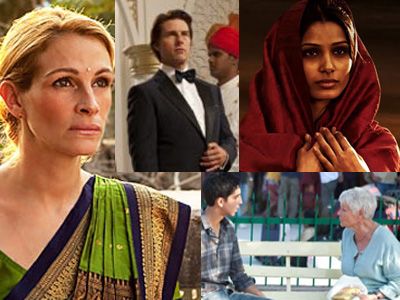 oks towards the West.

Academy Award-winning director Kathryn Bigelow shot her film “Zero Dark Thirty” (“ZD30”) in Chandigarh. Canning a few scenes in India is deemed as a lucky allure for Directors to pull in the crowds.

“The Dark Knight Rises” has Christian Bale in the Batman costume, jump off a helicopter at the Mehrangarh Fort, Jodhpur. “The Best Exotic Marigold Hotel” was shot extensively in Mumbai and Udaipur. Thomas Hardy’s novel ‘Tess of the d’Urbervilles’ adaptation for the screen titled ‘Trishna ‘was shot in Jaipur”  ‘Life of Pi” and “Singularity” to name a few.

Mission Impossible 4: Ghost Protocol had Tom Cruise maneuver  his swanky BMW i8 in the dingy by lanes of Mumbai . Julia Roberts- starrer “Eat Pray Love” and “A Mighty Heart” based on the life of Wall Street Journal reporter Daniel Pearl, had scenes shot exclusively in India. Not to forget Danny Boyle’s ‘Slum Dog Millionaire’ which was set against an Indian backdrop.

Besides Films, Hollywood celebrities have set their sights on Indian locales to exchange their wedding vows. In 2007, Actress Liz Hurley and Indian Tycoon Arun Nayar said “I Do” at Umaid Bhawan Palace in Jodhpur. The wedding was complete with Rajasthani Folk dance, white horses, rose petals showered on the glowing bride, Sangeet at the Nagaur Fort and reception at Mehrangarh Fort.

In 2010, British comedian Russell Brand and American singer Katy Perry zeroed in on the Ranthambhore tiger sanctuary near Jaipur, in Northern India to take their ‘sat pheras’. The guests were put up in luxury tents with a mandap pitched in the wooded Aman-i-Khas resort of Ranthambore Tiger Reserve. Their “Hindu-style wedding” was complete with pundits reciting mantras in Sanskrit.

In 2008, Pop star Madonna and ex-husband Guy Ritchie toured the sandy dunes of Rajasthan, which offers privacy and opulent luxury. “Rolling Stones” front man, Sir Mick Jagger came to India  with his daughter Jade in 2008. He stayed at Hotel Rambagh Palace while Nicole Kidman stayed at Udaipur’s exotic ‘Lake Palace’ for the shoot of an Ad film by Indian film maker Shekhar Kapur.

Reasons may vary but India is fast emerging as a favorite destination with film makers. If the locations have got you thinking about making that trip, try Indian Eagle for Lowest Airfares to India. Visit www.indianeagle.com for Cheapest tickets to India at Discounted prices.