Giving back to the community, that too in times of need, is the greatest religion in the world. Sikhs live by their faith in serving the community wherever they are. They are always at humankind’s disposal from cooking for hundreds of thousands of devotees at the Golden Temple in Amritsar to helping the wounded and sheltering the stranded in regions of geopolitical crises. 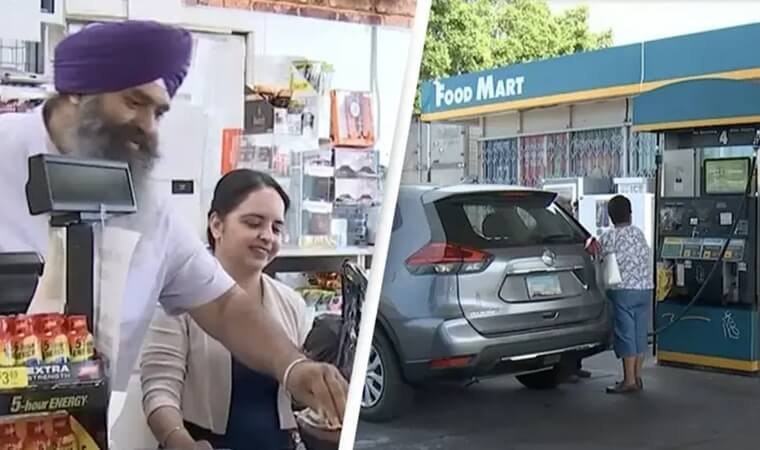 Jaswiendre Singh, an Indian-origin Sikh in Arizona, proved that one does not need to be affluent to lend a helping hand to the community. Jaswiendre who owns a Valero Gas Station and Food Mart in Phoenix is selling gas to his customers at a lower price than the purchase price in view of the skyrocketing fuel prices. He buys fuel at $5.66 a gallon, but selling it at a price nearly half a dollar less than other gas owners is incurring a daily $500 loss to him.

However, the blessing he is reaping and the value he is passing on to others weigh a lot more than the loss on the scale of deeds. “My parents did teach us to help if you have something. If you have something, you have to share it with other people. We teach our children the same thing,” said Jaswiendre Singh.

He has been calling Phoenix his home for more than two decades. He got a means of sustenance, made friends, and raised three children in Phoenix thousands of miles away from India. He said he wakes up at 4 a.m. and works till midnight every day. His wife gives him a hand at the store as and when needed.

It is not that he is immune to the impact of keeping the fuel price low at his gas station. He has a family to provide for; he has household expenses to bear; he pays property taxes and insurance premiums every year. Losing out on $500 a day at the gas station is obviously impacting the cost of running both home and the store. But the value of “helping humanity” that the Sikh religion and community instilled into him has influenced the business decision.

Jaswiendre said without hesitation that he is happier about what he is doing than he is bothered about the loss. “Most of the cars driving through my station are not Mercedes. Hence, many car owners are in the need of saving on the current fuel prices. I can make up for the loss from the selling of gas with purchases inside the store. I can make the money somewhere, someday, but not right now. It’s time to help people,” he said nonchalantly.