India is a large country with population that is not easy to handle. The efficient transport system has made travel easier across the entire expanse of the country.The history of Indian Railways can be traced back to 1832, when the plan for the first rail system was drawn. The experiment to lay down a  track began in 1836 near Chintadripet Bridge, which is in Chennai. 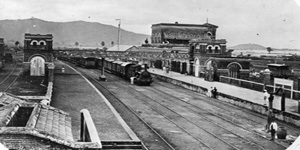 The experiment yielded fruitful results, a 5.6 km rail line was laid between Red Hills and St. Thomas Mount. On 22 december 1851, the first train chugged on its way to Roorkee.The success of the train paved the way for the passenger train.

16 April, 1853 the first passenger train covered the historic distance between Bori Bunder in Mumbai and Thane. The experimental distance was 34 kms with the aid of three locomotives Sahib, Sindh, and Sultan.

The 21 minute journey set off a milestone with the passenger train commemorating 160 years of seamless travel. The historic ride was enjoyed by 400  invited passengers in 14 carriages.

The train which began at 3:30 pm was flagged off by Lord John Elphinstone who was the governor.The Indian Railway Association was begun by Sir Jansetjee Jeejeebhoy and Jaganath Shunkerseth in 1845.

India stands 4th as the largest railway network in the world