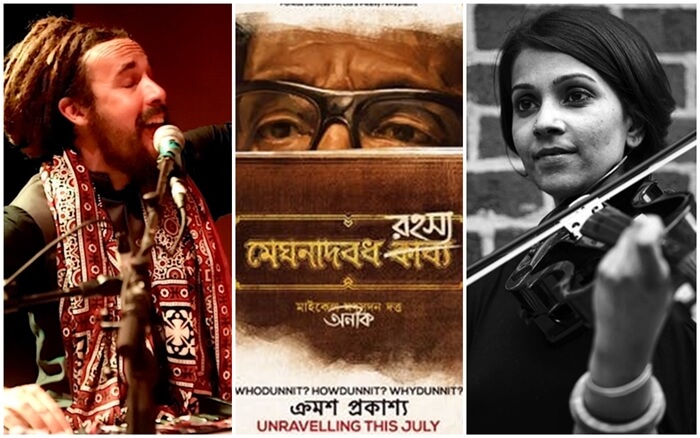 Good news for the Bengali community in San Francisco Bay Area! You can watch the Bengali film ‘Meghnad Bodh Rahasya’ as it will be screened at Serra Theaters in Milpitas on July 30. Among the not-to-be-missed San Francisco Indian community events in July 2017, the crime thriller is based on legendary poet Michael Madhusudan Datta’s ‘Meghnad Badh Kavya’ and includes several references from the Indian epic Ramayana. Directed by filmmaker Anik Dutta, the movie features Abir Chhatterjee and Sabyasachi Chakrabarty in lead roles.

Among the upcoming Indian events in San Francisco in July 2017, Non Stop Bhangra is back with its annual theme ‘Crash an Indian Wedding Party’. The night event will kick off with an interactive ‘Baarat Mob’ (dancing street procession) to dhol beats followed by Bhangra dance lesson. It is one of the top July 2017 events for Indians in San Francisco because popular DJs Anjali and The Incredible Kid will join the local DJs to boost up the energy level of the audience with lively songs. Do get dressed in Indian ethnic style. The event will be held on July 1 at Public Works club in San Francisco, CAL.

Big Ideas for a Better India

Big Ideas for a Better India on July 1 is one of the much-awaited San Francisco Indian events in July 2017. At this philanthropic event, leading Indians in USA will unveil their latest project to adopt 500 villages in India where farmers’ suicide is a frequent occurrence. Spiritual guru Sri Sri Ravishankar will deliver a keynote at the event of Big Ideas for a Better India in San Jose Convention Center.

The popular singing competition ‘Festival of Globe Idol’ is among the best events for San Francisco Indian community in July 2017 as it is a golden opportunity for budding singers to showcase their talent to the world. Participants can give audition for the contest by uploading their clips on YouTube and linking them to FOG’s website. The Festival of Globe Idol 2017 is dedicated to eminent South Indian singer Dr. P Susheela. Of all San Francisco Indian events in July 2017, the Festival of Globe Idol will culminate in felicitation of the legendary singer with the Lifetime Achievement Award. The annual contest will start from July 6 at San Jose University.

Telugu Indians in San Francisco are about to have a never-before experience at the Telugu show ‘BhooChakram’ on July 8. One of the sensational July 2017 events for San Francisco Indian community, it is the third production of the performing group ‘ManaM’ and promises a unique ‘movie on stage’ experience to the audience. ManaM identifies and showcases local Telugu talent in dance, drama, music and performing arts alongside raising funds for philanthropic projects. The Telugu show ‘BhooChakram’ will be held at Chabot College in Hayward.

Sevathon- Run, Walk or Do Yoga

Among the upcoming Indian events in San Francisco in July 2017, Sevathon is a fund-raising event for various charity missions such as supporting child education, providing portable water to the underprivileged in India, etc. You can make donation towards charity by taking part in a half marathon, walkathon or a yogathon., The event will be held by NGO Sevathon at Arena Green East in San Jose on July 9.

Qawwali Concert by famous music band Fanna-Fi-Allah will take Indians in Bay Area on a soulful musical ride on July 9. One of the Indian events in San Francisco in July 2017, the concert will explore ancient traditions of Sufi music amidst melodious chorus songs, rhythms of tabla and group clapping. Trained under the guidance of eminent Qawwali masters, Fanna-Fi-Allah has released ten albums to date. San Francisco’s Great American Music Hall is the venue for this event.

Indians in San Francisco are all set to celebrate Guru Poornima on July 14 at Shiv Durga Temple of Sunnyvale in Bay Area. Celebrated to pay homage to teachers, Guru Poornima is one of the important Indian festivals. It is one of the best events for San Francisco Indian community in July 2017 as the celebration will be a great opportunity to catch up with the Desis and binge on delectable Indian dishes.

New York-based Indian singer Rini will rock Indians in San Francisco with her vocal talent at a live concert on July 15. A graduate of Berklee College of Music, she has worked with Oscar-award winning music composer AR Rahman and participated in various music festivals across the world. Her signature music is a blend of Art-rock, Carnatic, Electronica and Jazz. Among the top July 2017 events for Indians in San Francisco, it will be held at SLG Art Boutiki and Gallery in San Jose, California.

One of the most-awaited San Francisco Indian events in July 2017, ‘YUGPURUSH – Mahatma ke Mahatma’ portrays the transformation of Mohandas Gandhi to Mahatma Gandhi. Based on some true events in Mahatma Gandhi’s life, the Hindi play depicts the poignant relationship between Gandhiji and his spiritual mentor Shrimad Rajchandraji. It will be staged at the Chabot Performing Arts Center in Hayward on July 21. Do not miss it!

Travel Beats, a leading Indian American community magazine by Indian Eagle, publishes the latest travel, tourism, visa, immigration and community news apart from listing upcoming Indian events in US cities. Indian Eagle is a trusted travel partner of Indians in the US for booking their cheap flights to India from USA.