Do chill out with some of the best Indian events in Atlanta in December if you are not traveling to India from Atlanta this holiday season. We at Indian Eagle are up with our list of events for Atlanta Indians in December 2017 as usual we do every month. Atlanta Indian Idol 2017, New Year Eve party, laughter contest, Kuchipudi dance drama and children’s Christmas parade are some of the most popular events for Indians in and around Atlanta, GA. 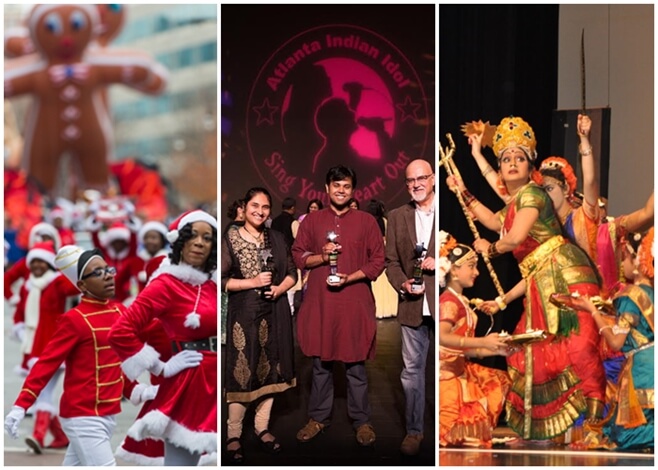 Atlanta will usher in the festive season with Children’s Christmas Parade on December 2. Among the most-awaited December 2017 events for Indians in Atlanta, the annual tradition will be a treat to young Indians as it will feature gleeful marching bands, colorful floats, giant helium balloons and several fun activities. The biggest holiday parade in the Southeast USA, it will transform Atlanta into a Santa Claus world.

Of all the Indian events in Atlanta in December 2017, Mr. and Mrs. South Asian USA on December 3 is an amazing opportunity for Indian couples in USA to set the ramp on fire with their fashion statement, style, performance and attitude. The nationwide beauty pageant is the first such event for South Asians in the United States. An altogether different concept unlike usual pageants, it has already garnered much hype among Indians in Atlanta, GA.

One of the most sought after Indian events in Atlanta in December 2017, Sri Rama Pattabhishekam Kuchipudi dance drama on December 10 will be a golden chance for young Indians in Clayton to know the epic tale of Ramayana. To be performed by renowned Kuchipudi dancer Sasikala Penumarthi and her students, the dance drama will depict the story of Lord Rama. Her enactment of the Ramayana will be accompanied by a soulful orchestra. All proceedings from the event will help fund a project of the Hindu Temple of Atlanta, GA.

The list of the upcoming Atlanta Indian events in December 2017 includes the Unlimited Laughter Show on December 17. A nationwide comedy contest in Hindi and Urdu, the competition will be like a get-together of several up and coming Indian American standup comedians to tickle the funny bones of Atlanta Indians in Norcross. The event will be the perfect platform for Desi standup comedians to showcase their comical talent to the world.

Good news for aspiring singers and music lovers in and around Atlanta! The most-loved Indian singing contest ‘Atlanta Indian Idol’ is back again. Among the best Indian events in Atlanta in December 2017, the competition on December 17 will be more harmonious and enjoyable than the previous editions since a new category of musical instruments has been added to the Atlanta Indian Idol 2017. Be ready for an amazing musical extravaganza with young singing talents.

Atlanta is all set to welcome 2018 with one of the craziest New Year eve parties in Georgia. We added NYE in the ATL 2018 to the list of events for Atlanta Indian community in December 2017 because of all the glitz and glamour at the party. It will be an evening to remember in the new year as the party will feature world-class DJs whirling the trendiest beats, scintillating drinks, multiple party rooms, comedy shows, delectable food and several other entertaining events.

Indians in and around Atlanta are about to indulge in a musical fiesta at the Antakshri Show in Norcross on December 10. It is not just a musical program but a national-level music contest. Open to all enthusiastic singers, the contest will see participants contend each other with their singing prowess in Hindi and Urdu. The sportive musical challenge is sure to take the audience on a joyful ride of melodious songs. What more do you need than this list of Indian events in Atlanta in December 2017?

Travel Beats, a leading Indian American community magazine by Indian Eagle, publishes the latest travel, tourism, visa, immigration and community news. Indian Eagle is a trusted travel partner of Indians in USA for issuing cheap airline tickets to India from Atlanta and other cities in Georgia.