Home / Features / Indeed, Indian Americans are Taking over the US. These Indian-origin Leaders Prove it in the Beginning of 2022

“Americans of Indian descent are taking over the country,” said President Joe Biden during a virtual interaction with NASA scientists, including Dr. Swati Mohan, who spearheaded the historic landing of Perseverance Rover on Mars. What he casually said continues to be true, as more than 50 Indian Americans have been appointed for key leadership roles related to policy-making and governance in just less than one year of the Biden-Harris administration. Also, in the very beginning of the year 2022, several Indian Americans hit headlines for making it big in various niches. Indeed, the Indian immigrants make the highly-educated and highest-earning ethnic community in America. 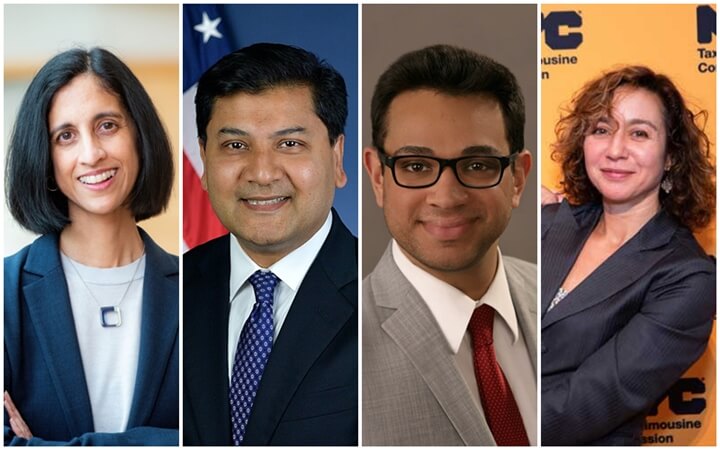 Indian American Tejal Desai, an award-winning biomedical engineer, tweeted, “I never imagined my career will come full circle.” She is all set to lead the third oldest engineering program in the US as dean of her alma mater, Brown School of Engineering in Rhode Island, where she graduated from 3 decades long. Currently, she is a professor in the Department of Bioengineering and Therapeutic Sciences at the University of California, San Francisco. She is known for creating innovative ways to deliver medicines to targeted organs in the human body using micro and nanoscale technologies.

As Dean of Brown School of Engineering, Tejal Desai will be working to expand research and teaching collaborations within the school and across the campus, and grow the school’s research enterprise with a focus on pressing societal challenges.” “One of her key priorities will be to diversify the student body at all levels while recruiting and retaining more faculty from historically underrepresented groups,” according to the school’s press release. On completion of her PhD, she became the first faculty in the Department of Bioengineering at the University of Illinois, Chicago in 1998. She was also an academic leader at the University of Boston.

The year 2022 is a boon for Virginia-based Amitabha ‘Amit’ Bose who the Senate voted as the first Indian American administrator of the Federal Railroad Administration (FRA). As America’s top rail official, India-born Amit Bose will lead ‘FRA’s safety regulatory oversight of more than 800 passenger and freight railroads, national rail policy and planning, as well as FRA’s financial assistance grant programs”, leveraging his two decades of experience, expertise and leadership in improving the safety and sustainability of the surface transportation system.

America’s 15th FRA administrator Amit Bose came with his parents to the US when he was 5. He played a key role in some of the high-level rail transportation projects, including California High-speed Rail, Liberty Corridor, and the Northeast Corridor Gateway Program. In the new role, he will responsible for improving and modernizing the freight and passenger rail network by overseeing the USD 66 billion investment in various projects under the Bipartisan Infrastructure Law.”

Dr. Rattan Lal, Board of International Food and Agricultural Development

Another distinguished Indian American who made it big in the beginning of 2022 is Professor Rattan Lal, an award-winning soil scientist. President Biden has appointed him as a member of the Board for International Food and Agricultural Development (BIFAD) that counsels the US Agency for International Development (USAID) on agricultural reforms and issues related to food insecurity in developing countries. Globally recognized as a pioneer in soil-based agricultural management, Dr. Rattan Lal has had illustrious career spanning five decades and five continents.

In 2020, India-born Dr Lal was felicitated by the World Food Foundation and awarded the World Food Prize for his research work on soil carbon management, climate-resilient agriculture, sustainable soil management, and food security improvement techniques. In 2007, he received a Nobel Peace Prize certificate. His breakthrough research has benefited more than 500 million small-scale farmers and increased food security for over two billion people across the globe.

An adjunct professor of his alma mater, the Indian Agricultural Research Institute, Indian American Dr. Rattan Lal is the Goodwill Ambassador for Sustainable Development Issues at the Inter-American Institute for Cooperation on Agriculture. He has served as president on the board of the Soil Science Society of America, and the International Union of Soil Sciences. The 77-year-old hails from Punjab, India.

At the dawn of 2022, Indian American Gautam Raghavan made it big as head of the White House Office of Presidential Personnel (PPO). Actually, President Biden promoted him from the deputy director of the PPO. Prior to being inducted into the White House, he was the deputy head of Presidential appointments on the Biden-Harris Transition Team. The First Indian-American to lead the federal office of Presidential Personnel, Gautam Raghavan acted as the chief of staff to Republican Pramila Jayapal until the Biden-Harris’ landslide victory in the US elections 2020.

Born in India and raised in Seattle, Gautam Raghavan resides in Washington DC. In the Obama regime, he led the federal initiative “Don’t Ask, Don’t Tell” that allowed the gay community to join the US military without requiring them to disclose their sexual orientation. From 2011 to 2014, he served as a bridge between the Obama administration and the LGBTQ community, and the Asian American and Pacific Islander (AAPI) community. He also provided strategic guidance to such organizations as the Gill Foundation, the Biden Foundation, and the Indian American Impact Project & Fund.

Amid the New Year 2022 celebrations, Indian American Sam Joshi was sworn in to the office of the Mayor of Edison that a significant Indian-origin population calls home in New Jersey. Endorsed by New Jersey Governor Phil Murphy, Edison-born Samip ‘Sam’ Joshi is the first Mayor of Indian descent to lead the civil development of Edison having half of its total population hailing from South Asia.

Reportedly, Sam Joshi has been involved in the civil affairs of Edison since he was 14. For two years (2010 and 2011), he worked as an Edison Police Telecommunicator for all public safety calls. At 27, he was the youngest elected member of the Edison Township Council. He has led the residents and civic officials to adopt green energy. He fought hard to stop the mushrooming of warehouses in several neighborhoods of Edison. He strives to keep taxes low for minority-owned businesses and small-scale women entrepreneurs in Edison. He believes that the residents’ tax dollars should not be invested in overdevelopment which would, otherwise, increase property taxes.

On January 1, 2022, Indian American Meera Joshi assumed office for the Deputy Mayor of New York City for operations. Her selection as a Deputy Mayor of NYC is a historic milestone for the Indian-origin populace of the Big Apple. In her new role, she is responsible for ensuring that the civic officials respond to and meet the needs of every community in real time. Born and raised in Philadelphia, Meera Joshi has more than 16 years of experience in working with government agencies.

On the first day of assuming office at the White House, President Biden appointed her as Deputy Administrator of the Federal Motor Carrier Safety Administration (FMCSA), an agency of the DOT. She successfully led the agency through hiccups and hurdles caused by the pandemic, natural disasters, workforce crisis and other unprecedented events in 2021.

In the years gone by, Meera Joshi served New York City in various roles and capacities. She was the Inspector General in the Department of Corrections, ensuring fair investigation of corruption and criminality at all levels. She was also the CEO of New York City Taxi and Limousine Commission, the largest for-hire transportation regulator in the US, for 5 years (2011-2015).