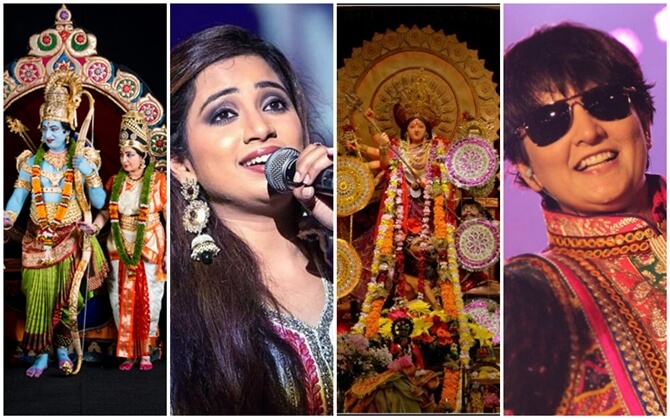 ISKCON of Houston is inviting participants for their inaugural Kirtan Fest. Indian Americans in Houston will experience a soulful fest with rejuvenating kirtans throughout the day from 2 to 4 September 2017 at the ISKCON temple in Houston, TX. The fest will be a combination of kirtans, bhajans and seminars with special guests like Sanyasis, travelling preachers and other artists. The fest promises to be the best among the Indian events in Houston in September 2017 offering attendees a holistic spiritual experience.

Kusum Sharma’s Shri Natraj School of Dance & Kalakriti Performing Arts will showcase Ramleela for the Indians in Houston on 24 September 2017. Ramleela is a dramatic re-enactment of the life and journey of Shri Rama and is traditionally performed as part of Navratri festivities. The play is certainly one of the most awaited events among all the Indian events in Houston in September 2017. Patrons can attend the show at VPSS Haveli in Houston, TX.

With the festive season fast approaching, Indians in Houston will be able to do all their shopping in September 2017 at the Houston’s biggest Diwali Bazaar organized by A & M Design Studio. The Bazaar will feature stores with a variety of products ranging from Ethnic Clothing, Stunning Jewelry, Diwali Gifts, Arts, Handicrafts and much more.Among the Indian events in Houston in September 2017,the Bazaar with it’s diverse product options covering Diwali, Dussehra, Navratri and wedding necessities is a must attend for all Indian American shoppers. The Bazaar will be held on 17 September at Stafford Center in Stafford, TX.

In September 2017 the Houston Telugu Cultural Association presents Taarala Sandadi, a Telugu Entertainment Event. Indian American community in Houston is in for a fun filled day with juggling acts, live music, dance and sumptuous food at Taarala Sandadi. With performances from Anjana Sowmya, Rohith, Yazin Nizar, Aksha and the like, the event is shaping up to be the most enjoyable among all the Indian events in Houston in September 2017. The event will be held on 4 September 2017 at Arabia Shrine Center in Houston, TX.

In September 2017, the Indo – American Association Houston and Bharatiya Kalai Maniram jointly present the Hindustani – Carnatic Concert to Indian Americans in Houston.  Hindustani and Carnatic with their distinct but complementary styles can be synchronized to create heavenly music. Among all the Indian events in Houston in September 2017, the Concert offers the best auditory stimulus. The Concert will feature Ronu Majumdar (Hidustani, Bansuri), Rajhesh Vaidhya (Carnatic, Veena), Vinod Venkataraman (Mridangam), Harshad Ketkar (Tabla), Ravi Balasubramanian (Ghatam) and Srinivasan Govindraj (Moorsing). The Concert will be held on 17 September at The Wortham Center in Houston, Texas.

Travel Beats, a leading Indian American community magazine by Indian Eagle, publishes the latest travel, tourism, visa, immigration and community news. Indian Eagle is a trusted travel partner of Indians in USA for booking their cheap flight tickets to India from Houston and other US cities.