Rich in tradition, Halloween is a favorite with all age groups. Coinciding with the Fall Carnival or Harvest festival, Halloween is celebrated as a prelude to the season of Fall. 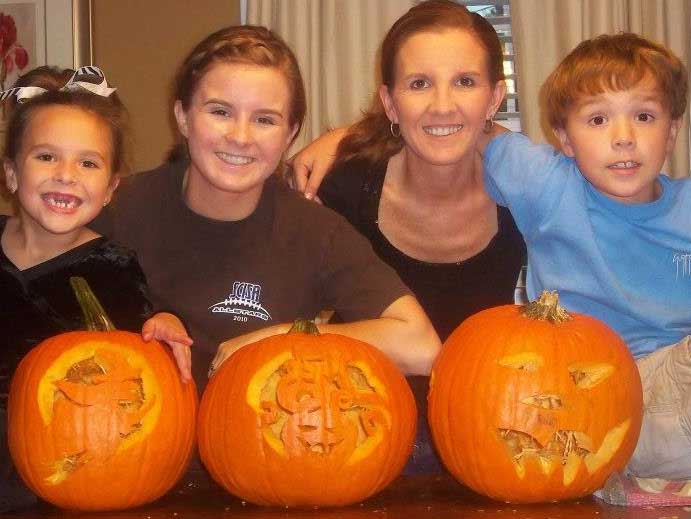 Children are excited, planning what to wear. The scariest costume walks away with all the attention. “Trick or Treat” is the delightful role play that Kids love.

Carving out the Jack-o’-lantern with the family has become a tradition which is originally from Ireland. Spotted on porches, all across the United States, it has become a common sight  during the month of October.

Carving pumpkins isn’t about how big or colorful the pumpkin is. It isn’t even about having the carving done perfectly. When I get down to carving pumpkins, it is mostly about the fun we indulge in as a family. It’s about feeling good and bonding together as a family. Each member of the family helps the other carve out a portion of the pumpkin. Together the family participation results in lots of laughter and a messy house, but no one has any complaints.

A visit to the Pumpkin Patch is where the fun begins. Always select the right pumpkin that is visually appealing, a pleasing deep orange. The shape has to be grown on its side with a flat spot. It is creatively added to the overall design of the jack-o’-lantern. The rind has to be tough, free of cuts, soft spots or bruise. Scooping out the pulp and seeds is the real essence of fun.

Jack-o’-lantern literally means “man with a lantern” Over time, the homemade object also known as a “turnip lantern”. It was made by scooping out the inside of a turnip, carving the shell into a crude representation of the human face, and placing a lighted candle inside it.” These lanterns form of pranksterism, to scare innocent traveler on lonely roads.

Originally turnips were used by Irish immigrants who substituted turnips with pumpkins, which are easier to carve. The general idea about Halloween is dressing up, narrating ghost stories, having spooky parties, trick-or-treating and pumpkin carving.

In reality, Halloween is actually based on an ancient Celtic holiday known as Samhain pronounced “sow wan”, which means “summer’s end”. End of the Celtic year, starting at sundown on October 31st through sundown on November 1st, Halloween evokes colors of Fall in bright orange and ochre.

The Celtic calendar was divided by four major holidays. The date marks both the ending and beginning of the eternal cycle of seasons.As Halloween marks the beginning of winter, cattle and sheep are moved to closer pasture. Harvesting and storing up crop is marked by the Harvest Day celebrations.