With Holi celebrations on our list of Chicago Indian events in March 2018, Desis do have a most colorful time ahead. March is full of not only colors but also melody since there are Pankaj Udhas Concert, Zakir Hussain Tabla Concert and Ilayaraja Live Concert in the Greater Chicago Area. Moreover, there is an exclusive program for women by women in celebration of International Women’s Day in March 2018. 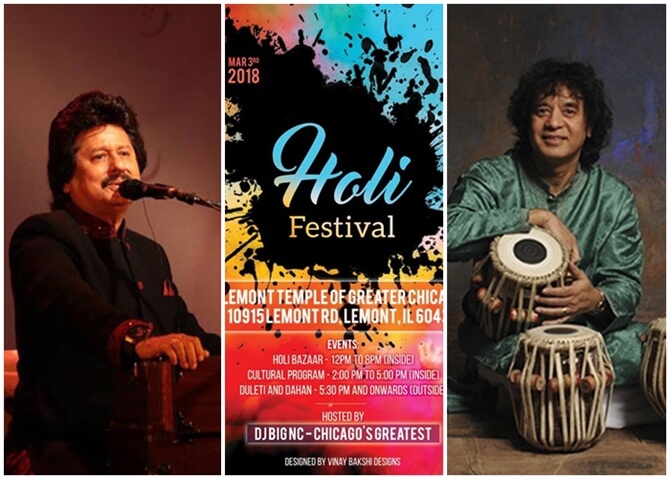 Our list of Indian events in Chicago in March 2018 begins with Holi, the most colorful Indian festival. The Hindu Temple of Greater Chicago in Lemont will celebrate Holi with Indians in and around Chicago. Chicago’s Holi 2018 celebrations promise loads of fun through a number of entertaining programs and cultural activities including Holika Dahan. There will be a magnificent Indian bazaar to shop at for the festivity. Undoubtedly, Holi 2018 at the Hindu Temple of Greater Chicago will be a grand affair among the Chicago Indian events in March 2018. Interestingly, it’s a free event for all.

Holi Milan by Chicago Association of Rajasthanis in America

The fervor of Holi 2018 celebrations in Chicago will continue with Holi Milan on March 10. Organized by the Chicago Association of Rajasthanis in America, Holi Milan will see a huge gathering of Rajasthani Indians on a lively evening in Willowbrook. It is one of the few Chicago Indian events in March 2018 for Desis to catch up for a most colorful celebration of harmony and unity through fun and food. Traditional cultural performances will surely add a zing to the event.

Once you have enough of Holi celebrations in the Greater Chicago area, get ready for a shower in the fountain of comedy on March 10 in Wood Dale, Illinois. Renowned Indian American standup comedian, Alexander Babu will bring the house down with Alex in Wonderland, one of his great hilarious performances. Of all Indian events in Chicago in March 2018, ‘Alex in Wonderland’ standup comedy show will offer healthy doses of fund and frolic through satire and sarcasm.

World-renowned Indian tabla player Zakir Hussain and flautist Rakesh Chaurasia are coming together to entertain the Indian community in Chicago on March 13. The duo will pay homage to Indian classical music with their enthralling performance at a live concert in Urbana. Touted as one of the most-hyped Chicago Indian events in March 2018, it will be a soulful treat for Indian classical music lovers in and around Chicago.

Indians in Illinois are in for a musical fest in March 2018 as eminent South Indian music maestro Ilayaraja will perform live in Rolling Meadows and Naperville on March 23 and 24 respectively. The event will be a wonderful opportunity to meet the legendary music composer and see him perform some of his best songs. Noted singers Mano, KS Chitra, Rahul Nambiar and Hari Charan will join Ilayaraja to make the evening more melodious. You should definitely add it to your list of not-to-be-missed events for Chicago Indians in March 2018.

There is an exclusive event for women in general, on our list of Indian events in Chicago in March 2018. Named WINGS: Celebrating International Women’s Day, it will be held at a tribute to Mahadevi Verma, a celebrated Indian poet. An engaging dance drama on her poems, highlighting women power and empowerment is a highlight of WINGS: Celebrating International Women’s Day in Naperville. The event will also feature short plays based on award-winning short stories and an exhibition on local women’s art.

Our list of Chicago Indian events in March 2018 at Indian Eagle ends with Pankaj Udhas Live Concert on March 30. A legendary gajal singer who needs no introduction, Pankaj Udhas will spend a melodious evening with Indians in Chicago at his live concert. Get ready to be spellbound under the magic of his soulful gajals.