The triumph of Good over Evil is celebrated during  Durga Puja in Kolkata with high spirits. The major festival of Bengalis, referred to as Sharodotsav,it celebrates the power of female(Shakti).Symbolized by  Goddess Durga who wields an assortment of weapons in her 10 hands and rode a mighty lion, Durga Puja is a major festival for Bengalis. 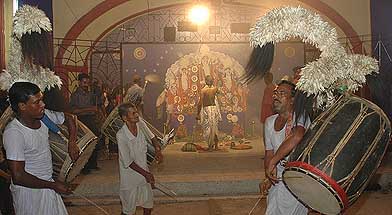 Durga Puja marks the victory of Goddess Durga over the evil buffalo demon Mahishasura and reestablishment of peace and sanctity on earth. After the aarti, the traditional dance form of ‘Dhunuchi nritya’ or ‘the dance with effervescent smoke’ is perfomed with enthusiasm.The dance is accompanied by the sound of dhak, the traditional drums.

The dhunuchi is a funnel based earthen pot that has an open top. Dhuno, powered incense and burning coconut shells are placed inside the dhunuchi, with thick smoke rising from the pot. Dhunuchi’s placed on palms, forehead and between their teeth, the dancers begin the balancing act to the tempo of the drum beat.

An integral part of Durga Puja celebrations are the deep percussion of the dhak, decorated with long white or multi-coloured feathers.The atmosphere smells of Shiuli flower,the official flower of West Bengal.Durga Puja is a time of reunion. Bengalis make that selective trip to be home for the festival. Women wearing white sarees with deep red broad borders, the festival is synonymous with Kolkata.