“Dr. Prabhakar is a brilliant engineer and applied physicist. She will lead the US Office of Science and Technology Policy to leverage science, technology and innovation to expand our possibilities, solve our toughest challenges, and make the impossible possible. I share Dr. Prabhakar’s belief that America has the most powerful innovation machine the world has ever seen,” President Joe Biden had stated while nominating her as his chief advisor science and technology in June this year. 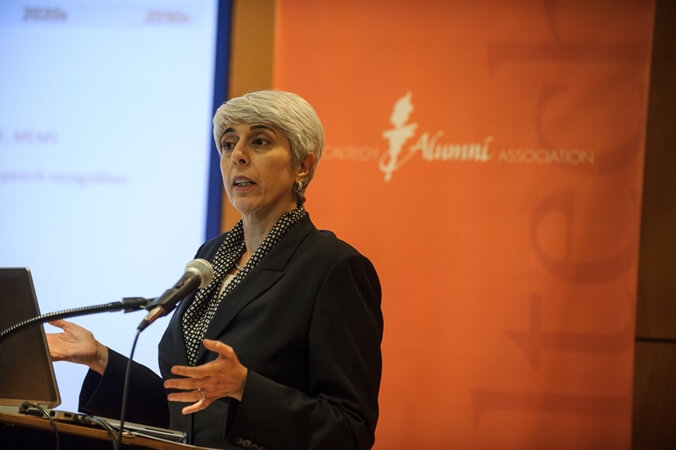 Adding to the 130 plus strength of Indian Americans in the corridor of power and decision-making, Dr. Arati Prabhakar created history at more than one level. She is the first woman, first immigrant, first Indian American, and first person of color to be appointed as Director of the White House Office of Science and Technology Policy (WHOSTP). It shatters former President Donald Trump’s record of having over 80 Indian-origin leaders in his administration and former President Barack Obama’s record of having roped in more than 60 Indian Americans for key roles.

“What could be bigger than the ‘historic’ bipartisan confirmation of Biden’s nomination of Dr. Prabhakar for one of the topmost positions in White House on the eve of Navaratri when ‘women power’ is worshiped in every walk of life! We celebrate whenever an Indian ascends to the throne of a global CEO. Now is the time to rejoice in her being part of the think tank for one of the global leaders in science and technology. Just imagine the President of the world’s biggest economy and most powerful country will listen to Dr. Arati Prabhakar’s advice about the impact of science and technology on domestic as well as international affairs, such as climate emergency, geopolitical crisis, and socioeconomic security,” said Sourav Agarwal, the Editor of Travel Beats.

Prior to this, she was Director of the Defense Advanced Research Projects Agency (DARPA) for five years. She led the National Institute of Standards and Technology (NIST) from 1993 to 1997. Interestingly, she was the first woman director of NIST. As Director of DARPA, Dr. Prabhakar supervised the “prototyping of a system that could detect the use of nuclear and radiological materials in unlawful activities”. At DARPA, she led the teams that worked towards developing tools to help discover human trafficking networks in the dark web. At NIST, she helped small and medium-sized manufacturers to scale up their competitiveness from the early seed stage to the national level.

She had two stints at the Defense Advanced Research Projects Agency; one as director for 5 years from 2012 to 2017, and the other as program manager for 7 years from 1986 to 1993. After her first stint at DARPA, Dr. Arati Prabhakar spent over a decade in Silicon Valley where she worked on different verticals including consumer electronics, design technology, and semiconductor process in various roles ranging from a company executive to a venture capitalist.

She founded Actuate in 2018 in Palo Alto, California; since then, she has been the CEO of her non-profit organization. Actuate is responsible for conducting ‘rigorous R&D programs’ to develop cost-effective, sustainable solutions for the challenges of climate emergency, health crisis, and information technology to humankind.

Dr. Arati Prabhakar came to the US at the age of 3, as her family immigrated from New Delhi to Chicago. Later they settled in Lubbock, Texas when she was 10. A member of the National Academy of Engineering; she was the first woman to get a PhD degree in applied physics from the California Institute of Technology. She was a fellow at the Center for Advanced Study in the Behavioral Sciences, Stanford University. She is a member of the governing board of the Pew Research Center.