Home / Flavors / After Return from India, She Quits Job and Earns USD 35 Million by Selling Bhakti Chai in USA

Chai is an elixir of life in India. This sacred beverage in Indian households is an integral part of the Atithi Devo Bhava belief in India. Tea that the British introduced in the colonized India does sell like a hot cake and hit the jackpot across the globe today. It went through naturalization for decades before it became an iconic Indian beverage. These days, the world is cashing in on Indian chai with ginger aroma and other flavors. Brook Eddy, an American resident of Colorado in the US, has built a business empire and earned INR 228 crore so far by selling Bhakti Chai.

Back in 2002, Brook Eddy took flights to India from Denver, Colorado and took part in a social-justice movement then. Tea is what she was offered most of the time during her visit to villages in west India. She wholeheartedly fell in love with chai and its different flavors varying from one region to the other depending on ingredients used. Unlike other foreign travelers who take handcrafted artifacts as souvenirs home from India, Brook Eddy’s takeaway from India was her love for tea. 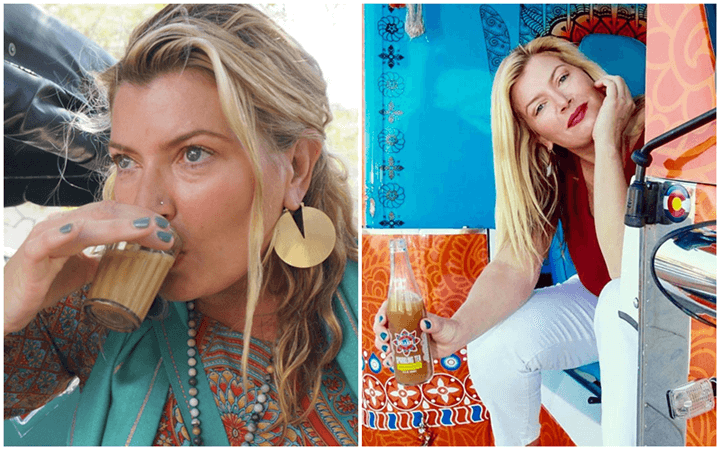 The myriad flavors of Indian chai that had spellbound her senses were missing from the cafés in Boulder, Colorado. She went on to brew a unique flavor of tea and named it Bhakti Chai. What started as a humble attempt to spread her love of Indian chai around has evolved into a multi-million dollar business over the years.

By 2007, she started selling jars of her version of tea at the back of her car in and around Boulder. Her homemade brew became a favorite of her friends and neighbors who often took away jars of iced tea from her refrigerator and put the money on the table. It made her realize that her version of fresh ginger tea (which she called Bhakti Chai) could be produced and monetized for cafes and retailers.

A single mother of twins, Brook Eddy quit her fulltime job and focused on commercialization of Bhakti Chai. With the first round of investment in 2008, she employed two brewers, built a team, bought a ginger press and zeroed in on the packaging of Bhakti Chai. Thus, she laid the foundation of Bhakti Chai on what she experienced in and borrowed from India.

Brook Eddy’s Bhakti Chai is not out and out a commercial pursuit. Rather, it is driven by the ethos of social entrepreneurship. It makes donations to various organizations which work for the welfare of global communities. Gita Giving – one of the social-giving wings of Bhakti Chai – helps promote inspiring, noble, innovative projects for community wellbeing and development.

Capturing the chaos and vibrancy of India, which she loves to her heart’s content, Brook Eddy’s Bhakti Chai has earned whopping revenue of US$ 35 million (a little more INR 227 crore). Born in Colorado and raised in Michigan, Eddy feels a strong connect with India where she seeks to experience something new whenever she visits.