The Rock art site of Bhimbetka is an archaeological World Heritage site in the interiors of Madhya Pradesh.The exhibits give evidence of the existence of Life.The Bhimbetka Caves have the drawing of human history recorded for over some 300,000 -700,000 years. 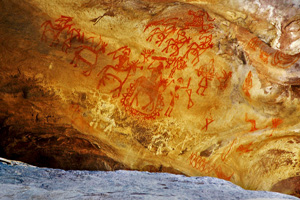 These petroglyphs are the oldest ever known in the world.Painitngs dating back to 11-14 AD century are recorded here.Some rare rock carvings are around 30,000 years old.

The name Bhimbetka is associated with Bhima renowned for his immense strength, from the epic Mahabharata. The word Bhimbetka is said to be derived from Bhimbaithka, meaning “sitting place of Bhima” or “where Bhima was seated”.

Legend has it that the Pandavas stayed in these caves.The massive rock resembling a gigantic frame of Bhima, the second Pandava is preserved till date.

Indian Eagle recommends you to take time off, go on an excursion to Bhimbetka, the archaeological treasure house. Explore the terrain of the dense forest and craggy cliffs with over 600 shelters dating back to the Neolithic age.

The chronicle of Human History has baffled historians and archeologists. The most popular of these cave paintings are sought after as they have been declared as a World Heritage Site.This UNESCO citation Rock shelter was first mentioned by the Indian archaeological records in 1888 as a Buddhist site.Visit our website at www.indianeagle.com for the Lowest Airfare Guaranteed to Bhopal.