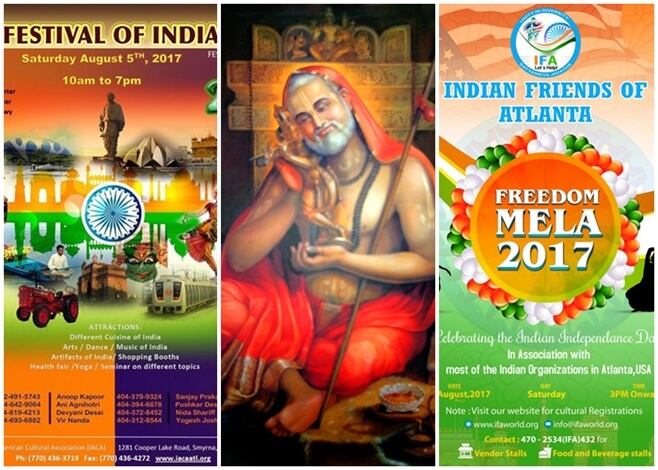 The Indian Friends of Atlanta is celebrating the Indian Independence Day in association with most of the Indian organizations in Atlanta, USA on August 12 from 3pm. There are many attractions in this festival of India which includes live cultural, musical and dance programs with a grand parade highlighting the diversity of India. The Indian Americans in Atlanta will get an opportunity to relish sumptuous Indian food showcasing the cuisine of India. This is undoubtedly the most exciting Indian events in Atlanta in August 2017 with many activities for all age groups, such as Camel and pony rides , face painting, henna, stilt walkers, fire eaters, carnival rides, inflatable’s, euro bungee and may other games.

The Bohemian Bollywood musical event is considered as one of the best Indian events in Atlanta in August 2017. Bohemian Bollywood is an inventive melodious presentation from an ensemble of the best musical talent. The creative musicians experiment new tunes with medleys, instrumentals, mashups and un-plugs. Reserve your seat early to dance, sing and drool along this close-to-the-heart musical evening. The proceeds from the show will be donated to charity. The Atlanta Indian community is in for a delightful musical event scheduled on August 6 at Atlanta Music Studio, Suwanee, GA.

The Atlanta Indian community is a blessed lot to witness self-realization seminar from renewed spiritual master Pujya Deepak Bhai. The Self-Realization seminar is a three day spiritual discourse scheduled on August 1-3 at Gujarati Samaj, Tucker GA. This event is considered to be one of the best spiritual Indian events in Atlanta in August 2017 for the reason that it gives a chance to the people to discover true happiness and realize their own self. This seminar is not restricted to any religion and can be attended by people of any faith.

The Festival of India is one of the most awaited Indian cultural events in Atlanta in August 2017. The major attractions of this event are the different cuisines of India and a seminar on diversified topics like Yoga and Health. This festival of India event will also house artifacts and shopping booths for all visitors. Apart from this, there is an arts and dance program that reverberates your souls with heart touching Indian Music. The festival of India is scheduled on August 5 from 10 am to 7 pm at Infinite Energy Center and Gwinett Civic Center, Duluth, GA.

Travel Beats, a leading Indian American community magazine by Indian Eagle, publishes the latest travel, tourism, visa, immigration and community news apart from listing upcoming Indian events in US cities. Indian Eagle is a trusted travel partner of Indians in the US for booking their cheap flight tickets to India from Atlanta and other US cities.